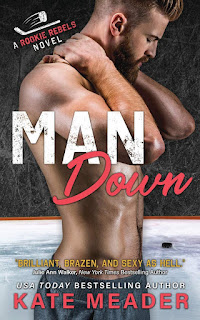 I've been texting the wife I lost, the woman I loved beyond measure . . . Now someone else has answered back.Gunnar Bond is broken.Three years ago, he lived through the car crash that took his wife and twins away from him--though "lived" barely describes his current state. Giving up professional hockey, going off grid, and drinking himself into oblivion are his coping mechanisms. Another is texting his dead wife about his days without her. Therapeutic? Doubtful. Crazy? Definitely. But those messages into the ether are virtually the only thing stopping him from spiraling to even darker places.Until someone texts back ...Sadie Yates is losing it.Suddenly guardian to a little sister she doesn't know and a misbehaving hound she'd rather not know at all, she's had to upend her (sort of) glamorous life in LA and move back to Chicago. The nanny has quit, the money's running out, and her job is on the line. The last thing she needs is her sister's hockey camp counselor, a judgmental Viking type, telling her she sucks at this parenting lark. Thank the goddess for her sweet, sensitive, and--fingers crossed--sexy text buddy who always knows the right thing to say. In the same city at last, they can finally see if their online chemistry is mirrored in real life. She just needs to set up a meeting ...A ruined man who claims to have used up all his love is surely a bad bet, but Sadie's never been afraid of a challenge ... even if this one might shatter her heart into a million pieces.

Kate Meader has never let me down. One of my favorite contemporary romance authors, Meader infuses her books with steamy romance, complicated relationships, sharp banter, perfectly-timed humor, and a whole lot of heart. She brings her characters to life and is not the least bit hesitant to delve deeply into their emotions, and my own. Man Down is the newest story in her Rookie Rebels hockey world and, for me, one of the best she's ever written.

Grief is a difficult subject to write about without allowing its darkness to overwhelm the story, while still giving it its due. Meader doesn't soft pedal Gunnar's unimaginable grief in this book, especially in his texts, as well as the series of flashbacks leading up to the accident three years ago that claimed his family's lives (keep the tissues handy). But while parts of the book are very sad, Meader expertly tempers that sadness with humor, hope, and a whole lot of sizzle, as Gunnar is dragged back into the light...and life.

I adored Sadie. I loved her spirit, her kindness, her determination to do the right thing (even to her own detriment). She's a very relatable character and I was in her corner, cheering her on, the whole way. I enjoyed the female friendships she made within the Rebels family and the strength and support she unexpectedly discovered within this circle of women. I loved the fiery chemistry between Sadie and Gunnar. Whether engaged in verbal combat over misunderstandings about Sadie's young, hockey-playing, half-sister or sneaking away for hot, secret, hockey-rink sex, these two never failed to create fireworks. But I also enjoyed the quiet times between them. Meader uses those initial, anonymous texts to expertly weave a heart connection between these two and set the foundation for what follows.

Man Down stands on its own and readers new to Kate Meader's Rebels world will be able to enjoy it on its own merits. Fans of the Rookie Rebels and Chicago Rebels books will no doubt enjoy the numerous appearances by other characters from the earlier books, including one of my favorites, Theo Kershaw (InstaCrush). His outrageous humor and endearing sweetness are always fun and I really enjoyed his friendship with Gunnar.

If you enjoy sexy, sassy contemporary romance with emotional depth and sigh-worthy, happy endings, check out Kate Meader's Man Down. I loved it!


Have you discovered Kate Meader's hockey romances yet?

What's the last book that made you ugly cry?