Review - - Duchess if you Dare 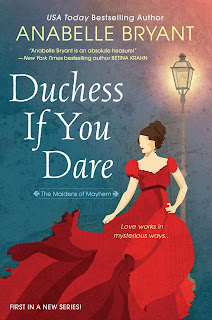 From the glittering ballrooms of the ton to the city's grittiest corners, London has no shortage of wrongs in need of righting--and the Maidens of Mayhem are prepared for the challenge. United by secrecy and sisterhood, these daring women from all walks of life aim to fight injustice wherever it takes them--even into the arms of unexpected love.
Scarlett Wynn's tragic childhood taught her that life can be cruel to women with little power. So when a local seamstress disappears, Scarlett vows to find out why. Armed with a weapon and her courage, Scarlett scours London for clues--and crosses the unlikely path of Ambrose Cross, the Duke of Aylesford, at an unlikely place: an upscale brothel. The Duke is trying to solve a mystery of his own, and Scarlett is sure they can help each other--if she can resist the attraction that draws them together...As Duke of Aylesford, Ambrose is duty-bound to protect his family name from scandal no matter the cost. But Scarlett's fearless spirit forces him to look beyond his world of privilege. Scarlett is as intoxicating as she is dangerous, igniting a fire in him like no other. When the pair learn both mysteries they're trying to solve are tied to a string of missing women, the tangled scheme they uncover may put their lives, and their growing love, in mortal danger--and lead them to search their hearts like never before...
PJ's Thoughts:
I really enjoyed Scarlett. She's fearless, good-hearted, and determined to help those less fortunate who are conveniently forgotten or ignored by London society and law enforcement. She's risen above her beginnings to become a force to be reckoned with,  clever, committed, and capable of protecting not only herself but those around her, a savvy chameleon who can cross classes with ease but is always aware of her place - or lack of one - in society. I loved how she went toe-to-toe with the hero who, quite honestly, was way too used to having his own way in everything.
It took me a while to warm up to Ambrose, a stuffy duke who's pulled unwillingly into a dangerous investigation with a woman he desires, doesn't fully understand, and tells himself he can't have. He has a lengthy growth arc which I do believe was necessary for his character. He's not used to following another's lead, especially when that person is a both a commoner and a woman, and learns the hard way to listen to the person who, in this case, knows more about the workings of the grittier parts of London than he. As for his unexpected emotions, he may want to follow the direction his heart is leading him but he's held back by a lifetime of indoctrination into the rules of society as well as the duty and responsibility of his position. Capitulation that came too quickly or easily would not have been believable. In the end, I was confident in their feelings for one another and the decisions they each made regarding their future.
The mystery/action/danger portion of the book was also enjoyable. I clued in to the main villain pretty early on though it took me a while to figure out exactly what the full scope of the mystery was. There was also a twist near the end involving a secondary character that I didn't expect (love that) but we never find out what happens to that character which was disappointing. I wanted a more detailed explanation as well as closure for Scarlett.
If you enjoy cross-class, historical romance with a dash of action, mystery, and danger, give Duchess If You Dare a try. I think it's a promising start to this new series and am looking forward to the other maiden's stories in future books.
Posted by pjpuppymom at 6:00 AM