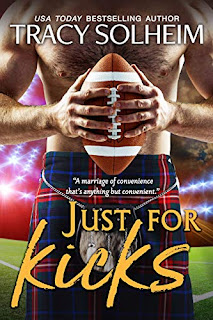 Andi Larsen learned early on there is no such thing as fairy godmothers. A childhood spent in foster care will do that to a girl. She’s working her way through night school and is on the cusp of establishing her own business without help from anyone, thank you very much. But when her deadbeat ex steals her identity, amassing a staggering debt in her name, her fairy godmother appears in the guise of a spunky, Fireball whisky-wielding septuagenarian. The older woman’s solution for Andi? Tie the knot with a kilt-wearing, moody jock whose legs look sexier in a skirt than hers do.Declan Fletcher never intended to be a place-kicker for a professional football team. But fate had other plans. Exiled from his beloved Scotland a decade ago, Dex is now a superstar athlete known throughout the league as the “Man with the Million Dollar Leg.” But when a mix-up in his immigration paperwork threatens to send him home before the season begins, he’ll do anything to avoid deportation and facing his greatest mistake. Even if it means marrying a pink-haired waif of a lass with eyes that seem to see everything he’s determined to keep hidden.
PJ's Thoughts:
Anyone who has known me for half a minute knows how much I love football. Combine my favorite sport with a marriage-of-convenience romance between the most unlikely of couples, written by one of my go-to authors, and I'm going to be all over that puppy.
I thoroughly enjoyed this first book in Solheim's new Milwaukee Growlers Football, contemporary romance series. It's filled with snappy banter, deep emotion, realistic conflict, well-placed humor, and a sigh-worthy happy ending.
Andi and Dex are both fully-developed characters who easily gained my affection and support. I loved Andi's determination and spirit, her refusal to give up even when faced with seemingly insurmountable odds. I was drawn to her as strongly as many of the secondary characters in the book are and more than ready to ride to her defense during those times when people tried to take her down. Dex is a complex character who most certainly does not fit the stereotypical "dumb jock" stereotype. This kilt-wearing Scot, with the sexy brogue, broody demeanor, and golden leg, is actually a highly intelligent man carrying a heavy burden who needs someone to shake him up and help him find his way home.
The secondary cast, both two and four-legged, add richness to the story, helping move the plot forward, and a certain little girl steals more than a few hearts, including mine. I'm already intrigued by several characters and looking forward to discovering what Solheim has planned for them.
Whether you're a sports fan or simply someone who enjoys a well-paced contemporary romance with humor, heart, emotional depth, and happy endings, I recommend you give Just For Kicks a try.
Posted by pjpuppymom at 6:00 AM