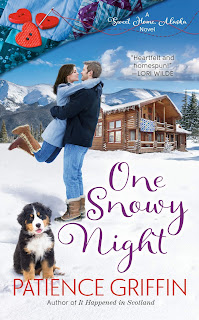 A woman struggling to raise her daughter alone in a small Alaskan town finds her simple existence upended when the father of her child returns. . . . Sweet Home, Alaska, was once a thriving, idyllic town, where A Stone's Throw Hardware and Haberdashery and the Sisterhood of the Quilt were the cornerstones of the community. Then, in one fatal moment, two young lives were cut short, and everything changed. Now the Stone family businesses have closed, the diner is in the red, and the population has dwindled to 573. After the tragic accident that took her sister's life, Hope McKnight discovered she was pregnant, and gave up her dreams of college to raise her daughter. When Donovan Stone returns to sell his family's properties and to cut final ties with Sweet Home, he's shocked to find Hope still there--and a single mother. The pull between Hope and Donovan is as powerful as ever. But so are the secrets and lies stemming from that long-ago tragedy. Will they be able to overcome the past, or will the heartbreak of bygone days destroy their love again?
PJ's Thoughts:
When I read Patience Griffin's debut, To Scotland with Love, back in 2014 I knew I had discovered an author with the ability to tap into all of my emotions, hold me captive throughout an entire book, and leave me deeply satisfied at the end. That debut launched Griffin's successful Kilts and Quilts series with eight books brimming with laughter, tears, and happy endings, all wrapped up in the charm of a small Scottish village and the (frequently) meddling folks who reside there.
One Snowy Night launches another new series of contemporary romances for Griffin, this one set in a small, rural town in Alaska. Once again, she's created a compelling story, dealing with difficult, real-life issues, and filled with intriguing characters, deep emotion, and a hard won, happy ending. You'll want plenty of tissues for this one.
You all know how much I enjoy a second-chance story. One Snowy Night is filled with second chances, and not only for Donovan and Hope. The fall-out from the past tragedy at the core of their relationship touched many lives within Sweet Home. When Donovan returns, he incites hope not only for his own personal relationships but for the entire community. Bringing that hope to fruition, however, will only be successful with forgiveness, acceptance, and the people of Sweet Home once again opening their hearts to one another with love, especially Donovan. Griffin skillfully weaves all the threads of the story together to create a promising future that doesn't erase the pain of the past but, rather, embraces the memories of the lives lived, and lessons learned along the way.
One Snowy Night is a character-driven story and I enjoyed the relationships formed among those characters. Hope and Donovan are at the center, of course, but equally important is the tumultuous relationship between Hope and her daughter, Ella as well as Ella's evolving relationship with Donovan, and the personal challenges threatening Ella's future. There's much mending to be done here. There's also a secondary romance brewing, a surrogate familial relationship between Hope and a local business owner, and the multi-generational bonds of friendship among the girls and women in the Sweet Home Sisterhood of the Quilt. I love these women who come together to support, mentor, and celebrate one another through good times and bad.
There are several intriguing characters introduced in this book who I'm excited to get to know better. I don't know how many books Griffin has planned for Sweet Home, Alaska but if she writes it, I'll be buying it.
Exclusive Excerpt
One Snowy Night

Donovan scanned Hope, comparing his memory of seventeen-year-old Hope to current Hope. Current Hope needed to eat more, smile more, and get more rest, if the dark circles under her eyes were any indication. What happened to her after he left? “So you’re still in Sweet Home?” It was a leading question but he wanted answers . . . whether she wanted to give them or not.

Her lips turned into a stubborn straight line, letting him know she wasn’t going to respond. She pointed to the other room. “How does Rick know who I am?”

She was all attitude, no longer the sweet go-along-with-anything-he-said-girl. And the weird thing was, he kind of liked her this way.

Hope straightened her shoulders and stared him down. “Where’s your wife?”

Once again, she’d caught him off guard.

“I left her at home,” Donovan lied, trying to be as brazen as Hope.

Rick hollered from the kitchen, “Don’t let him fool you, Hope. He’s not married.” He stuck his head around the corner. “Never found the right woman.”

Donovan raised an eyebrow at Rick. “I think you should go outside and check for bears. Take some food with you. They like that.” Which reminded Donovan that he should pick up bear repellent if they were going to be here for a few days. Maybe a rifle, too. And Grandpa used to keep a soup can filled with marbles on the porch to scare them away.

He frowned at his charge. “He’s not necessarily my dog.”

“He’s worthless,” Donovan said loud enough for Rick to hear. “I really should fire him.” Donovan moved closer to the fireplace, where Hope stood. “What’s your daughter’s name?”

She stared at him wide-eyed but finally answered, “Ella.”

The name rocked him. “For Isabella?” Hope’s sister.

She nodded, this time with all the sadness in the world. “Yes.”

He went to a safer subject. “How’s your dad doing?”

He reached out to touch her but stopped himself. “Oh, Hope. I’m so sorry. I didn’t know.”

She moved her head as if trying to shake off the grief. “I heard about your grandfather. He meant a lot to all of us. As did your grandmother.”

For a moment, mutual grief filled the room. That one small connection felt like old times. Hope had always been so empathetic—issuing compassion as easily as if sharing a Ziploc bag of Oreos during lunch period. But they weren’t kids anymore and he wasn’t in the mood.

He stepped away. “Rick, what are you doing in there?”

A second later, Rick came into the room with a tray of chips, Pop-Tarts, and nuts, arranged like hors d’oeuvres.

“Are you kidding me?” Donovan exclaimed. The guy had been an elite Marine Force Recon and now he was acting like Martha Stewart.

Rick set the tray on the side table closest to Hope. “You have a guest. It’s only right you feed her.”

Hope did need to gain some weight. “Eat,” Donovan said.

Rick sighed heavily. “Sorry about him. He usually has manners.” He snatched a Pop-Tart before taking the seat across from her. “So Donovan tells me you were a better shot than him when you were kids.”

Surprised, she glanced at Donovan for a split second before answering Rick. “I just have better depth perception.”

“I’m the one who taught her how to shoot!” Donovan complained. He could’ve told her he’d qualified for Expert in the Corps but he didn’t share that info about himself.

Rick nudged the tray toward her. “Please have something. I don’t like to eat alone.”

Yeah, Donovan had heard his friend use that line many times on unsuspecting females. Rick oozed charm. And suddenly, Donovan got worried. If Rick spent too much time around Hope, she’d fall for him, like all women did.

“She better go.” Donovan approached Hope, not to hug her good-bye but to take the dog.

“Yes. I need to get home.” Reluctantly, she handed over Boomer before starting for the door.

Donovan gave Rick the I’ll-set-you-straight-when-I-get-back look before handing the puppy off to him.

“Yeah, I’ll walk you out,” he said, following her. “For protection.”

“I can take care of myself,” Hope said over her shoulder.

“Humor me, then.” Donovan hurried around her and held the door open.

He walked her out to her beat-up Honda Civic. “It was good to see you.” It wasn’t, really. The encounter made him feel uncomfortable on so many levels.

Her words were firm and felt final.

Fine by me. He walked back to the lodge, shivering from the cold.

Rick was waiting at the door. “Now that girl is a good reason to stay.”

For you or for me? Donovan shook the thought away. Long ago, he’d told Rick all about Hope, and he was certain Rick would never go after someone Donovan was interested in.

But Donovan wasn’t interested in Hope. Not since the day his brother Beau died.

Have you read any of Patience Griffin's books?
Do you enjoy books set in Alaska? Have you ever visited?
Do you quilt?
Patience has created a giveaway solely for the readers here at The Romance Dish. The winner will receive their choice of a signed print copy or an e-book copy of One Snowy Night (if winner is in the U.S.) or their choice of a print copy from Book Depository or an e-book copy if the winner is international.
a Rafflecopter giveaway
Griffin is also hosting a giveaway for a custom-made Alaska quilt representative of her new series. Click here for more information on entering the quilt giveaway.
Posted by pjpuppymom at 6:00 AM