Review - - A Rogue to Remember 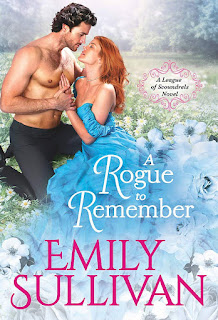 After enduring five interminable seasons, Lottie Carlisle has had enough of shallow London society, her boring little life, and her uncle Alfred's meddling. When he demands she accept a proposal by the end of next season or else he will choose a husband for her, she devises a plan: create a scandal shocking enough to make her unmarriageable and spend her spinsterhood far enough away in the countryside where no one will ever recognize her.Alec Gresham hasn't seen Lottie since he left his childhood friend without a word five years ago. So he's not surprised to find her furious when he appears on her doorstep. Especially bearing the news he brings: her uncle is dying, her blasted reputation is still intact, and Lottie must return home. As they make the journey back to her family estate, it becomes increasingly clear that the last five years hasn't erased their history, nor their explosive chemistry. Can Lottie look past her old heartache and trust Alec, or will his secrets doom their relationship once again?
PJ's Thoughts:
The first thing that drew me to this book is the fact that it's set in Italy. Any book set in Italy is going to set my heart to happy dancing, especially when written by an author who, through her words, immerses you in this unique, richly atmospheric setting. The scenes in Venice, in particular, are very authentic, especially at night when the back alleys and canals of this city by the sea can take on a mysterious, slightly sinister tone. She brought it all to life and put me right back in that country that speaks to my soul.
I also enjoy a friends-to-lovers trope and this one, with a reunion/second chance plot added in, was right up my alley. Both Lottie and Alec are well-developed characters who pulled me into their stories. I was in Lottie's corner the whole way, cheering her on in her bid for independence from her controlling uncle. I loved her intelligence, her wit, her determination, and her hard-won self confidence. Alec, on the other hand, had to work for my approval, as well as Lottie's. I understood his reasons for the decisions he made years earlier, the ones that broke Lottie's heart, but I wasn't going to forgive him too easily. I enjoyed his evolution, hurt for him when certain details of his early life were revealed, ached at his yearning for Lottie and celebrated when he finally realized what was most important in his life.
Secondary characters, as well as Alec's occupation, add a bit of suspense and action to the story that devolves into danger for Lottie. There's a twist near the end that took me by surprise as well as a mea culpa and forgiveness that seemed a bit too easy considering the pain and heartache the person's actions had caused. I would have liked to have seen that facet expanded a bit but it's a small quibble in the overall scheme of things.
I enjoyed my first Emily Sullivan novel and am looking forward to seeing what this debut author brings readers next. I hope it will be more action, adventure, and romance in continental Europe. Another book set in Italy would be just fine with me.
Posted by pjpuppymom at 12:30 AM