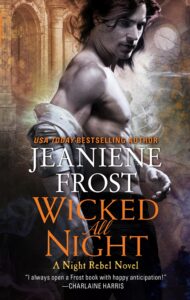 Wicked All Night wraps up, at least for now, the story of vampire Ian and vampire hybrid Veritas. It ties up all the plot threads nicely, has plenty of action, and threads a passionate, dangerous romance through it all. This book could be read as a standalone, but the conflict and the character development are best understood by starting with Book 1, Shades of Wicked.

When last we left Ian and Veritas, Ian was deathly ill after escaping from a magical trap. The current story opens with Veritas’s efforts to save him. He’s wasting away before her eyes. She has help from her demon half-brother, Ashael, but their combined efforts aren’t enough. When the golden deity Phanes turns up, he brings an unexpected offer of help, but for a price. Veritas was betrothed to him without her knowledge. He says he’s willing to end the betrothal but wants her to pretend they’re betrothed for a short time to help him save face. Veritas reluctantly agrees and travels to Phanes’s realm with him.

Nothing there is what she expected, and there are complications she isn’t aware of. In order to free her, Ian takes drastic steps that increase his magical abilities—again at a steep price. Those abilities, however, allow him to enter Phanes’s realm and force a reckoning.

Phanes has other tricks to play, though. He cons Ian and Veritas into helping him rescue two other deities, Morana and Ruaumoko, from the Netherworld. Ruaumoko has devastating seismic abilities while the Morana can freeze everything in a wide area. They plan to seize what they believe is rightfully theirs, dominion over the planet.

The quest to stop them takes Ian and Veritas through emotional twists and turns involving the vampire council, the ghouls, other allies, and their own hearts. Old legal issues with the vampire council come to crisis points and resolution. So does Veritas’s understanding of her powers. I’m being vague to avoid spoilers, but it was a pleasure to see Cat, Bones, Mencheres, Spade, Denise, and Vlad join in the struggle.

Overall, the story moves at a great pace. Both the emotional conflict and the magical plot twist and turn, with the romance sometimes heart-wrenching as these two beings struggle to be together. This is a satisfying resolution to Veritas and Ian’s story.