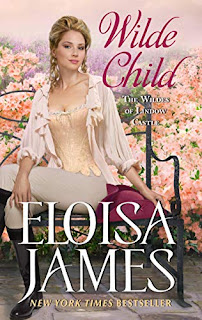 He wants a prim and proper duchess, not the Wildest of the Wildes!

Already notorious for the golden hair that proves her mother’s infidelity, Lady Joan can’t seem to avoid scandals, but her latest escapade may finally ruin her: she’s determined to perform the title role of a prince—in breeches, naturally.

She has the perfect model for an aristocratic male in mind: Thaddeus Erskine Shaw, Viscount Greywick, a man who scorned the very idea of marrying her.

Not that Joan would want such a dubious honor, of course.

For years, Thaddeus has avoided the one Wilde who shakes his composure, but he’s horrified when he grasps the danger Joan’s putting herself in. Staring into her defiant eyes, he makes the grim vow that he’ll keep her safe.

He strikes a bargain: after one performance, the lady must return to her father’s castle and marry one of three gentlemen whom he deems acceptable.

Not including him, of course.

I've been reading Eloisa James books for years but the last few books in her Wildes of Lindow Castle series are among my favorites. I've enjoyed their lightness of spirit, sparkling wit, sizzling chemistry, sense of humor, and feel-good emotion that warms my heart.

I really had no idea what to expect from Wilde Child. Both Joan and Thaddeus had appeared in earlier books but I had only come to know them at a surface level. There had been no attachment formed and my first opinions of Thaddeus were not all that favorable. That all began to change as I read their story and the layers behind the masks both presented to society were slowly peeled away. The evolution of Thaddeus's character was significant, and anticipated, but what surprised me more was the evolution of Joan. I had not expected her growth nor the direction it took. Watching both of them discover their true selves as their relationship progressed was pure pleasure. They made me laugh, made me sigh, and filled me with their joy. In these two, James has created interesting, fully-developed, sensual, loyal, caring, multi-layered characters who though, at first glance, seem completely wrong for one another, are actually the missing puzzle pieces that make one another whole. I adored them.

This is (possibly) the final book in the Wildes of Lindow Castle series. Fans are still hopeful that eldest brother, Horatius lives. His family believes he died eleven years ago but as his body was never recovered from the bog, that door remains slightly ajar. Whether James will resurrect him remains unknown though there are many tidbits scattered throughout Wilde Child that could be followed if she decides to return him to his family and share his story. Whether that occurs or not, Wilde Child is a fitting conclusion to the series and a tribute to this fiercely loving and unapologetically loyal family.

Though Wilde Child is the sixth book of this series, it can absolutely be read on its own. However, once you meet the other family members (and there are many featured in this final book), you'll most likely be eager to read their books as well.

Have you read any of the Wildes of Lindow Castle books?

Do you have a favorite Wilde couple?

In Wilde Child, Joan has dreams of being a stage actress. Have you ever performed on stage? What were your early dreams? Did you achieve them?

One randomly chosen person who posts a comment before 11:00 PM, March 27 will receive a print copy of Wilde in Love, the first book in the Wildes of Lindow Castle series.