Cover Reveal - - Where There's A Will

Where There's A Will
by Janna MacGregor
Prequel to A Duke in Time
Publisher: St. Martin's Paperbacks
Release Date: June 1, 2021 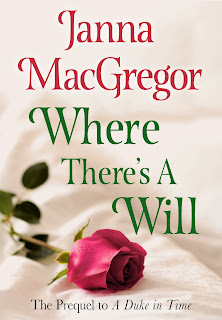 Katherine, Lady Meriwether Vareck, dreads attending the reading of her husband’s will, but she’s hoping she’ll at least have her dowry returned. And meet her departed husband’s half brother, the popular war hero duke, who seems to be everywhere, including her daydreams. Though the errant duke has never bothered to write or see her, Katherine decides to go to his house and introduce herself. Their first meeting shouldn’t be at a solicitor’s office, after all.Even though he’s just returned home from the war, Christian Vareck, the Duke of Randford, is quite tired of all the ladies vying for his attention by throwing handkerchiefs his way. That is...until he catches a glimpse of her, the woman with a handkerchief in hand, walking to his front door. When she suddenly turns and leaves without introducing herself, Christian is surprisingly devastated. Determined to discover her identity, he plans to scour the streets of London until he finds her. But first, he must locate his late half brother’s missing will, then meet his late brother’s widow, too…
PJ says:
If I didn't already have Janna MacGregor's next full-length novel on pre-order this prequel would have sealed the deal. A quick (50-page) read, Where There's A Will introduces the main characters of A Duke in Time and sets the stage for their journey with witty dialogue, an intriguing mystery, a peek into events that will help readers understand what motivates Katherine and Christian, and the stirrings of a mutual attraction that could complicate everything...or open the door to a love they could not have imagined.
Where There's A Will will be released June 1 but is available for pre-order now. Best of all? It's FREE!
Where There’s a Will

ebooks.com: https://bit.ly/324YH9p
A Duke in Time, the first full-length book in MacGregor's The Widow Rules series, will be released June 29. It also is available for pre-order.
A Duke in Time
by Janna MacGregor
The Widow Rules - Book 1
Publisher: St. Martin's Paperbacks
Release Date: June 29, 2021 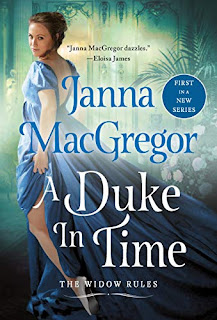 Katherine Vareck is in for the shock of her life when she learns upon her husband Meri's accidental death that he had married two other women. Her entire business, along with a once-in-a-lifetime chance to be a royal supplier, is everything she's been working for and now could be destroyed if word leaks about the three wives.Meri's far more upstanding brother, Christian, Duke of Randford has no earthly clue how to be of assistance. He spent the better part of his adult years avoiding Meri and the rest of his good-for-nothing family, so to be dragged back into the fold is…problematic. Even more so is the intrepid and beautiful Katherine, whom he cannot be falling for because she's Meri's widow. Or can he?With a textile business to run and a strong friendship forming with Meri's two other wives, Katherine doesn't have time for much else. But there's something about the warm, but compellingly taciturn Christian that draws her to him. When an opportunity to partner in a business venture brings them even closer, they'll have to face their pasts if they want to share each other's hearts and futures.

A Duke in Time

Have you read any Janna MacGregor books? Do you have a favorite?
Do you enjoy prequels? What about epilogues?
One person who comments on this post before 11:00 PM, April 16 will receive their choice of one book from Janna MacGregor's back list (books already published).
*Must be 18
*Open internationally - if winner does not live in the U.S., their book will be shipped from Book Depository.
Posted by pjpuppymom at 6:00 AM

Email ThisBlogThis!Share to TwitterShare to FacebookShare to Pinterest
Labels: A Duke in Time, Cover Reveal, Giveaway, Historical Romance, Janna MacGregor, St. Martin's, The Widow Rules, Where There's A Will