Review, Guest Post, & Giveaway - - One Thing Leads to a Lover 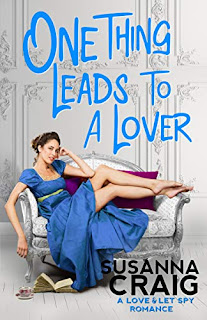 Amanda Bartlett, widowed Countess of Kingston, is a woman beyond reproach. Married at nineteen, she dutifully provided the Earl with an heir and a spare before his death three years ago. Since then, Amanda has lived a simple, quiet life. A life that, if she were honest, has become more than a trifle dull. So when an adventure literally drops into her lap, in the shape of a mysterious book, she intends to make the most of it—especially if it brings her closer to a charismatic stranger. . . . Major Langley Stanhope, an intelligence officer and master mimic known as the Magpie, needs to retrieve the code book that has fallen into Amanda’s hands. The mistaken delivery has put them both in grave danger and in a desperate race to unearth a traitor. It’s also stirred an intense, reckless attraction. Langley believes the life he leads is not suitable for a delicate widow, but it seems he may have underestimated the lady’s daring . . . and the depths of their mutual desire. . . .
PJ's Thoughts:
Susanna Craig's main characters are among some of my favorites in historical romance. I love that they're multi-layered, frequently flawed, and typically not ton-obsessed members of society. They intrigue me, pulling me into their hearts and minds with ease, and immersing me in their stories.
In her current series, which is inspired by (some of my favorite) 1980's television shows, the blend of mystery and romance, with her always impeccable historical research, has been especially enjoyable. Once again, in book two, One Thing Leads to a Lover, there's adventure, danger, sensual chemistry, heartwarming romance, and bad guys intent on causing harm to some of our favorite characters. It's a twisty journey with a few surprises along the way that kept me flipping pages from start to finish.
Langley and Amanda are both characters who spoke to me, engaging both my interest and my affection. I enjoyed the spark between them, the banter, and the fact that they were each intellectually challenged by the other. Respect and desire is a potent combination, and these two have an abundance of both. It was fun to watch Amanda gain confidence throughout her journey, finally taking control of her life and standing her ground, with both her family and Langley. And speaking of our hero, I adored his many disguises, his fascination with Amanda, his integrity, and his relationship with Pip and Jamie, Amanda's sons. In fact, his relationship with the boys was one of my favorite parts of the book. Langley also has emotional baggage to deal with before he can have a happy ending with Amanda and Craig does a good job of guiding him through that process. I was delighted with the outcome and especially, the peek into the future found in the epilogue which already has me eagerly anticipating book three!
~~~~~~~~~~
Thoughts on Adaptations
by Susanna Craig

I spend a lot of time thinking about why and how we tell certain stories over and over again. I’m in the middle of writing a series of historical romances that take their inspiration from television shows from the 1980s: Magnum P.I., Scarecrow and Mrs. King, Remington Steele. I also teach a course called “Jane Austen on Film” and another called “Retellings” that covers everything from fairy tales to Sherlock Holmes. So today, I thought I’d share some of my thoughts about adaptations.

Clearly, we can’t get enough of some storylines or characters. Take Pride and Prejudice, for example, which has been adapted in almost every form imaginable. We’re obviously drawn to handsome, brooding, wealthy Mr. Darcy. We enjoy watching him be humbled by love; the pampered son of an aristocrat has to work to gain Elizabeth Bennet’s affection without any guarantee of success. In order to keep enjoying the experience of Austen’s story—itself perhaps inspired by elements of Beauty and the Beast or Cinderella—we tell variations of it in adaptations that range from board books to graphic novels to musicals. We imagine how the story would look if set in another place or time. We seek out its echoes in Regency romances. And because creators keep bringing it to us in new forms, we can return to a beloved favorite with fresh eyes.

Some people think of adaptations and retellings as the products of laziness. After all, using old texts as the basis for new media means we don’t have to come up with original ideas or worry about copyright. But I usually prefer to think of them as homages to the stories and characters that have inspired us. There’s a challenge in creating new work from old worlds: Am I making something fresh and interesting? Does my story still capture that “something special” in the original that has spoken to readers over time?

Often our debates about adaptations are focused on the degree of their faithfulness to the original. A popular meme depicts an iceberg, with the fraction visible above the water labeled “the movie” and what’s still submerged labeled “the book.” The implication, obviously, is that the book is deeper, more complex—and therefore better. But that’s not really fair to either medium. What no movie can capture is your interpretation of a book (unless you’re the one making the movie, and even then, unless you’re writing, directing, acting, filming, and editing, other peoples’ ideas are bound to sneak in).

When we watch a film adaptation or engage with any other form of retelling, we’re getting a glimpse at someone else’s vision of the story, and I find that fascinating. I like to see how others imagine the characters or setting I think I know well. That’s why I try to stay out of those heated debates between fans of the 1995 TV miniseries of Pride and Prejudice and fans of the 2005 movie. I avoid choosing between Colin Firth or Matthew Macfadyen as Mr. Darcy. I like them both, but neither of them perfectly matches the character I have in my mind. For one thing, according to a very authoritative Buzzfeed quiz, my husband is actually Mr. Darcy! And my Mr. Darcy isn’t exactly like the one that Jane Austen imagined when she wrote the novel. But every time I encounter someone else’s version of her story, my experience is enriched.

How about you? Do you like prequels, sequels and other retellings? Do you have a favorite movie (or other) adaptation of a book? What makes it enjoyable to you? Or are you happiest with the version of the story that plays out in your head when you read?

Two randomly chosen people who post a comment before 11:00 PM, April 6 will each receive an e-book copy of Who's That Earl, the first book in Susanna Craig's Love and Let Spy series. (Click here for PJ's review of Who's That Earl and a Q&A with the author.)