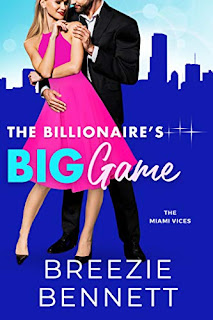 A billionaire bachelor up for auction. A single mom trying to avoid him. The last thing he wants is a commitment… but that happens to be the only thing she wants.

Noah Vice: When my mom signs me up for another one of her ridiculous fundraisers, I don’t think much of it. Until, that is, the drop dead gorgeous girl who ghosted me six months ago is announced as my highest bidder. Now’s my chance to finally get to know Zoe…and figure out exactly what she’s hiding. But when I meet her adorable, four-year old secret, I know this isn’t a game I should play.

Zoe Taylor: The last thing on earth I need right now is a casual fling with a hot billionaire. With a four-year old daughter and classroom full of eighth graders, there’s only one kind of relationship I’m looking for…a lifelong partner. But now, because of my meddlesome grandmother, I’m stuck with Noah for five unforgettable dates. He’s not marriage material, but I can’t resist a little fun. The only problem is… I might not beat him at his own game.

Breezie Bennett is quickly becoming one of my favorite new contemporary romance authors. Her fully-developed characters, intriguing storylines, impeccable comedic timing, steamy passion, and heart-tugging happy endings have me eager to return for each new book she publishes.

The Billionaire's Big Game launches her new The Miami Vices series with another page turner that kept me gleefully reading late into the night. I really enjoyed Noah and Zoe together. Both are likeable characters that seem totally wrong for one another when they first meet. At different places in their lives, it just isn't meant to be. But...six months later, and with the help of a lovingly meddling grandmother, they just might have a chance. Their chemistry is off the charts but Bennett skillfully gives them a slow-burn romance that allows them the time to develop bonds of friendship before sending them into deeper emotional waters. Their five, animal-centric auction dates are an absolute delight that give them the time and space needed to really start to get to know one another without the pressure of actual romantic dates. And the unexpected results of those dates for Noah begin to change his perspective on life in a big way.

While Noah and Zoe are the primary focus of the book, Bennett gives ample page time to Zoe's adorable four-year-old daughter as well as a few rescue animals with an abundance of love to share. They all enhance Zoe and Noah's love story with their heart-stealing antics and captured mine along the way.

While The Billionaire's Big Game is loosely tied to Bennett's South Florida Riders series (Noah's sister, Ellie is the heroine of book six, Sweet Ride and Noah runs the Riders football team for his family), this first book in Bennett's new series is a great place to begin for readers new to her stories. It has my enthusiastic recommendation.