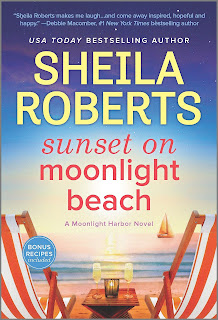 Jenna Jones has been standing on the shore of the Sea of Love for too long. Even with two good men interested in her, she's been afraid to wade in. According to her best friend, Courtney, she should. The water’s fine. Life is great! Practically perfect, if you don’t count Courtney’s problems with her cranky ex-boss. Maybe Courtney’s right. It’s time to dive in.When tragedy strikes, everything changes and Jenna's more confused than ever. But this fresh heartache might help her figure out at last who she can turn to when times get tough.
PJ's Thoughts:
One of the things I most enjoy about Sheila Roberts' books is the community she creates. While each book in a series has a primary romantic couple, other characters and their own journeys are seamlessly interwoven throughout. Reading one of the books in her Moonlight Harbor series feels like I'm sitting around a campfire on the beach with my neighbors, sipping a cold beverage and catching up on all the latest happenings in their lives.
Jenna Jones has been a key character in Moonlight Harbor since arriving in book one, bitter and broke after being betrayed by her cheating, free-loading husband (now her ex). Moving in with her great-aunt, Jenna and her teenage daughter have slowly become part of the fabric of the small beach town. With the court-appointed alimony she's had to pay her ex for the past few years about to come to an end, Jenna is starting to finally look ahead at what she wants her life to be once she doesn't have to work two jobs and pinch pennies to support her lazy ex and his girlfriend. And part of that future is the possibility of trusting another man enough to enter into a new relationship. The problem is...which man will it be?
I've enjoyed watching Jenna evolve over the course of the series and have been eager for her to finally get her own happily ever after. She's sure earned it. Roberts doesn't give her an easy path though. There's heartache, another betrayal, loss, weaselly relatives, and the slow realization that the heart wants what the heart wants, regardless of obstacles in the way. It's a sweet, heart-tugging, humorous, emotional story about family, standing up for yourself, refusing to settle, and claiming your heart's desire that had me laughing, crying, and sighing with satisfaction.
Posted by pjpuppymom at 6:00 AM