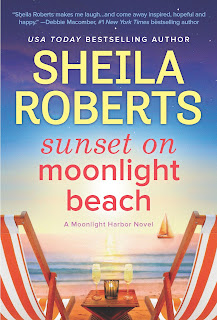 Jenna Jones has been standing on the shore of the Sea of Love for too long. Even with two good men interested in her, she's been afraid to wade in. According to her best friend, Courtney, she should. The water’s fine. Life is great! Practically perfect, if you don’t count Courtney’s problems with her cranky ex-boss. Maybe Courtney’s right. It’s time to dive in.
When tragedy strikes, everything changes and Jenna's more confused than ever. But this fresh heartache might help her figure out at last who she can turn to when times get tough.Full of warmth and humor, Sunset on Moonlight Beach proves that every ending can be the beginning of a beautiful new story.
~~~~~~~~~~

Sheila Roberts brings readers the long-awaited conclusion of Jenna Jones' story arc in the fifth book of her Moonlight Harbor series: Sunset on Moonlight Beach. Now that Jenna's ready to open herself up to love again, which of the two good men in her life will she choose?

Unlike her mother, Jenna had no problem being taken out to dinner. She and Brody enjoyed crab cakes (for her) and steak and lobster (for him) at the Porthole, and, later, a sunset walk on the beach. The waves danced along the shore, their lacy froth making a gentle swoosh like a dancer’s skirt, and the sun set the sky on fire, a final reminder of its power before leaving to let its quiet sister, the moon, take over.

“It’s so beautiful,” she said as they walked close together, his arm around her shoulder. Funny how I thought my life was ruined before I came here.  Turns out it was really just beginning.”

“I’m glad you came,” he said. He stopped them and switched from an arm around the shoulders to both arms around her waist. “My life sure began again when you hit town.” He smiled down at her, then did what Brody did best. He kissed her.

Yes, this was happiness, being with someone who wanted to commit to you, of knowing you’d have a safe and secure future.

“Jenna,” he said softly, “you know how I feel about you.”

She did. Was he going to propose right then and there? Suddenly she felt … what did she feel? Surely not anxious. What was there to be anxious about?

She nodded. And pulled back. Oh, bad body language. What was she doing?

“I’m not going to let you get away,” he said softly, and tucked her right up close again.

With the sun going down the temperature was dropping. The body heat felt good. Body heat. Feeling good. What was she waiting for? Just say it, Brody. Ask me right now. Let’s do this thing before I chicken out.

But she’d pulled away. He’d gotten the message. He started them walking again.

“We need to make this official,” she said, determined to move them in the right direction.

He studied her. “Are you sure?”

Brody was great. What was there not to be sure about? She smiled up at him. “Yes, I’m sure.”

“Well, then, I’m thinking I should be looking around for some bling for your poor, naked finger.”

He grinned. “So, want to come over to my place and really make it official?”

“After my finger’s not naked.”

He chuckled. “I can hardly wait to see you in the ring. Just the ring.”

“Come on back to the house. We can watch a movie.”

She shook her head at him. “You are so full of it.”

“Is that what you think?” he demanded, pretending to be insulted. “Jenna Jones, I never get tired of looking at you.”

Damien had never said anything like that to her. She was ready to be with someone who really appreciated her. That someone was Brody. What a perfect ending to her story.

No, she corrected herself, a perfect beginning. This was a new story, a much better one. Happily ever after at Moonlight Harbor. Beach walks at sunset, dinners out, having someone who was the polar opposite of her ex, willing to talk about something besides himself. Yes, it didn’t get any better than this. Brody was a great guy, and she was lucky to have him. She’d make him happy.

They went back to the house to find Aunt Edie on the couch, working on her afghan, finishing up watching Casablanca.

“Not the same as having the woman,” Brody said. “Anyway, I’ll take Moonlight Harbor and walks on the beach over Paris any day.”

He looked speculatively at Jenna. “But what about you? Would you rather have Paris?”

“I wouldn’t mind visiting, but I wouldn’t want to live there. Moonlight Harbor has my heart.”

“Paris would be a wonderful place to honeymoon,” Aunt Edie said slyly.

Jenna could feel herself blushing, although she wasn’t sure why. It was becoming obvious to everyone, including her, that she and Brody were a permanent item.

He chuckled. “It might be at that.” The movie credits began to roll, and he said, “Okay, ladies, time for a second feature. What have you got with guns and gore, Edie?”

“Nothing,” she said. “Well, except for one of those Jack Reacher movies.” She looked accusingly at Jenna. “Jenna bought it for me.”

“You know you enjoyed it,” Jenna said.

“Sounds good to me. Let’s put it on,” said Brody. He knelt in front of the wicker basket that held the DVD collection Jenna had made for Aunt Edie – streaming still wasn’t her thing.

“It was exciting, I’ll say that,” Aunt Edie conceded. “And that Tom Cruise is such a cutie. Not as cute as James Garner was, mind you. Nobody was as gorgeous as him when he was in his prime.”

“He doesn’t say a lot in this movie though,” said Aunt Edie.

A man of action who didn’t say a lot. Who did that remind Jenna of? Never mind Seth. He was history now, the road not taken. Brody was the future, a perfect future.

She made popcorn and he got the movie going and they all settled in to watch it. Cozy, homey, comfortable—this would be the rest of her life. Safe. She was more than ready for that after the drama and heartbreak Damien had dished out.

The movie came to a satisfying end, with the fictional Jack Reacher riding off into the sunset—on a bus instead of the proverbial horse—ready to continue righting wrongs.

Sabrina and Scotty arrived, hungry after a night of laser tag at Sabrina’s friend Hudson’s house.

“How was laser tag?” Jenna asked.

Which Jenna knew meant awesome. Hey, she was on top of things.

“Do we have any cookies left?” Sabrina asked Aunt Edie as Scotty plopped on the floor and stretched out his legs.

“I can get them,” Sabrina said easily and hurried off to the kitchen.

“What did you guys do tonight?” Scotty asked politely, taking in the three oldies.

Brody took the arrival of the kids as a signal to leave and stood. “Guess I’ll get going,” he said.

“I’ll walk you to the door,” Jenna offered.

Once there, he snugged her up against him for a final kiss. She could get used to this.

“I can’t get enough of you,” he whispered against her hair.

“You always know what to say,” she told him.

He should have. He’d had enough practice. With several women in town, as a matter of fact.

But so what? She was the one he wanted.

Yes, her life was moving forward. She found herself too keyed up to sleep, even after she’d shooed Scotty off and Aunt Edie and Sabrina had gone to bed—one to sleep, the other to text with her friends. The beach was calling.

She crossed the dunes to find someone had a small fire going, a solitary man. She knew exactly who. She should turn back. Beach fires with Seth would hardly be appropriate now that she was moving forward with Brody.

She started to back up, but he had eyes like an owl and he’d seen her. “Join me,” he called.

It would be rude not to. He was a big part of her life at the Driftwood. They were friends.

“Your mom all settled in?” he asked as she took a seat next to him on a log.

He pulled a can of root beer out of the mini cooler at his feet and offered it to her. He knew she wasn’t a beer drinker. Had he hoped she’d see his fire and join him and planned accordingly?

She took it and popped the top, took a drink. She suddenly felt a little hot, sitting there by the fire.

“Yep. I think she’ll be happy down here.”

“Pretty hard not to be. Nice house.”

“She could have stayed with us, though,” Jenna said. “We’d have made room for her.”

“Parents like having their own digs. Both my brother and my sister have tried to talk our mom into living with them. She says the only way they’ll get her out of her place is feet first.”

“Good-hearted, strong. My dad wasn’t in the picture for long. She pretty much raised us single-handed. She’s lot like your mom, only a little rougher around the edges.”

“Will she ever come up here and visit?”

“She says she’ll make the trek if I ever get married.” He cleared his throat, took a drink from the beer can he was holding.

“Which will be in a parallel universe,” Jenna said.

A little resentfully? No. She had no reason to be resentful. Her life was all sorted out. She moved them on to new conversational territory. “Thanks again for your help today.”

“You didn’t really need me. You had plenty of help.”

“I’ll always need you,” she said. As a friend, of course.

“I don’t think so. You’ve got the house peddler now. Looks like things are getting serious between you two.”

“I need to get serious with someone,” she said.

“Yeah, you do,” he agreed, but didn’t volunteer for the position. “I want to see you happy.”

“The guy’s got money, a fancy house, fancy car.”

“As if that stuff’s important to me? How shallow do you think I am?” she demanded.

“You’re not, but there’s nothing wrong with having a good life. He’ll be good to you.”

“I need somebody to be good to me.” It was about time. Past time.

“You deserve that,” he said.

All this nobility. Blech. “You don’t have to be so agreeable, you know.”

“How do you want me to be?” He sounded irritated.

Jealous. Angry. Willing to fight for her. “Why did you invite me to join you, anyway?”

“Heard you coming. I was being polite.”

He crumpled his beer can and tossed it in the mini-cooler. He shoved it shut, then stood and doused the fire from a nearby bucket of water.

“No, I just have a hard time letting go,” he muttered.

“No one told you to let go,” she snapped.

He kicked sand over the sizzling mess. “No one had to.” He picked up his cooler and bucket. “Goodnight, Jenna.”

It was suddenly very cold with the fire doused. She stood shivering and watched him walk away. Seth was damaged and there was no mending him because he wouldn’t let anyone close enough to do that. She truly had made the right choice.

Looks like Jenna has a difficult choice on her hands. Have you been reading Sheila Roberts' Moonlight Harbor series? Which of the two men in Jenna's life would you choose?
Three people who post a comment before 11:00 PM, April 13 will each receive a print ARC of Sunset on Moonlight Beach.
*Must be 18
*U.S. addresses only
Posted by pjpuppymom at 12:30 AM