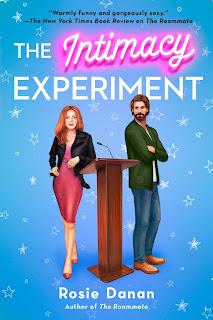 Naomi Grant has built her life around going against the grain. After the sex-positive start-up she cofounded becomes an international sensation, she wants to extend her educational platform to live lecturing. Unfortunately, despite her long list of qualifications, higher ed won't hire her.

Ethan Cohen has recently received two honors: LA Mag nominated him as one of the city's hottest bachelors and he became rabbi of his own synagogue. Low on both funds and congregants, the executive board of Ethan's new shul hired him with the hopes that his nontraditional background will attract more millennials to the faith. They've given him three months to turn things around or else they'll close the doors of his synagogue for good.

Naomi and Ethan join forces to host a buzzy seminar series on Modern Intimacy, the perfect solution to their problems--until they discover a new one--their growing attraction to each other. They've built the syllabus for love's latest experiment, but neither of them expected they'd be the ones putting it to the test.

An ex-porn star and a rabbi fall in love. This seriously sounds like the biggest joke ever. When I was asked if I would want to review the book, I was like, “Umm, the heroine used to be a porn star?” I mean, the romance novel industry has definitely found its brand in promoting sex positive stories for women, but I was somewhat hesitant about a happily ever after for a heroine who used to be a sex worker. All my conversations and “experience” about sex workers was that this was an industry that exploited women, and I was concerned that a heroine who had been in the industry wouldn’t be mentally, emotionally ready for a relationship (especially the kind that romance seems to promote: monogamous.) Of course, then I thought: “Well, Hellie, you don’t have this problem if it's a rake, right? I mean, isn’t a rake...sorta like a sex worker? You believe in their HEAs, don’t you?” So from before I even read the first page, this book was challenging my long held beliefs of what a romance story should be or do.

When I first started the book, I admit, I was determined not to be impressed. The opening paragraphs were okay, but my writer’s eye was critiquing them, looking for weaknesses in the heroine. And then I got to page 5 and I was sucked into the story. I started laughing. I started rooting for this tough-as-nails heroine whose hardness was very armadillo in nature, protecting a soft underbelly from ever being seen. And then I met the rabbi--and I was a goner.

As soon as I met Ethan Cohen on the page, I knew he would ruin me for all other rabbis. Soon he began to ruin me for all other fictional heroes. He was kindness, openness, and sweetness itself--all the while being sex on a stick. If Captain America had happened to be a rabbi--that’s what he was. And Naomi, while definitely sex on a stick, was not sweetness and kindness itself--she was more prickly than a hedgehog that fell into a nest of cacti. She acknowledges it. And yet being with Ethan makes her softer and sweeter--and he loves her just as she is. She was vulnerability itself, even as her outside seemed bullet proof.

It was so interesting to read a romance where both characters had each done so much work on themselves, who knew their faults and owned them, and yet still grew in the course of the story, allowing the reader to grow with them. It was also a book that showed the scope of what I think romance novels do: they show the intimacy of a relationship between two people, how it develops, what it reveals--and it’s not sex itself that reveals it. It was amusing to me to have a sex-worker heroine who loves sex...but doesn’t have sex with the hero until way long into the book. But it doesn’t mean this book isn’t sexy or romantic--it had those things in spades. I laughed hysterically throughout this book--the author has a real knack for dialogue and secondary characters that add to the primary characters’ development. But I also cried at scenes that were just beautiful to read, that were so visceral for the characters themselves, things that though I’m not Jewish...or an ex-porn star, I found relatable.

It’s a rare book--romance or otherwise--that can change a reader in a myriad of ways, but this one did for me. It may not be that book for everyone else (no book is), but I love how this book challenged my assumptions, grew my knowledge in topics I didn’t know or thought I did, and left me well satisfied and happy for the escapism I sought--as I usually do--with my romance novels. I am happy to see even more diversity in the romance book industry, more representation for more cultures and identities (not just cis-gender WASP identities), and I’m happy to learn from these diverse stories so I can be a better human in the real world, which I think is one of the primary things we all learn from our romance stories.