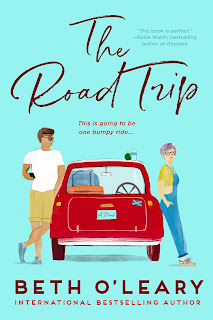 What if the end of the road is just the beginning?Four years ago, Dylan and Addie fell in love under the Provence sun. Wealthy Oxford student Dylan was staying at his friend Cherry’s enormous French villa; wild child Addie was spending her summer as the on-site caretaker. Two years ago, their relationship officially ended. They haven’t spoken since.
Today, Dylan’s and Addie’s lives collide again. It’s the day before Cherry’s wedding, and Addie and Dylan crash cars at the start of the journey there. The car Dylan was driving is wrecked, and the wedding is in rural Scotland—he’ll never get there on time by public transport.So, along with Dylan’s best friend, Addie’s sister, and a random guy on Facebook who needed a ride, they squeeze into a space-challenged Mini and set off across Britain. Cramped into the same space, Dylan and Addie are forced to confront the choices they made that tore them apart—and ask themselves whether that final decision was the right one after all.
Hellie’s Heeds:

When I read the blurb for this chick-lit/rom-com, I was excited. I love Scotland, British humor, and second chance romances, and I was looking forward to having characters stuck in a car with each other when they clearly hadn’t parted on good terms and there was unresolved conflict. People acting out, while others repressed responses for the good of the trip? What could be more British? But in the end--this is a long book made longer by the back and forth between two characters and two timelines--I really did not want these characters to end up together.

Now some of the reasons for this are Me. If I had read this book in my 20s, which is how old these characters are, I am sure I would have been, “Oh, love conquers all! He is the One!” and be very accepting and understanding of how everything played out. In fact, many times while reading how the characters were behaving, I was like, “Wow, these kids are in their 20s...this is exactly how someone in their 20s would behave.” And honestly for them to get back together while in their 20s was the best time for them to reunite--because if they had reunited in their 30s, I would have tossed the book away. Your 20s are the time for regrettable decisions.

Much of the conflict for the main hero and heroine was a lack of effective communication--which is a stumbling block for most any couple, especially young ones--until you learn to communicate better and be honest. And their communication style in the “now” sections did not seem to have improved since their time apart. They were still withholding honest dialogues and truths, afraid of what would be revealed to one another. Of course, if they hadn’t been doing this, the conflict would have dissolved entirely and the book would be about 200 pages shorter.

The real source of the conflict though--if one could narrow the issues to only one--was a secondary character, the hero’s best friend, who is an alcoholic and secretly (and angrily) in love with the heroine. He is the one who constantly disrupts their relationship, sows discord, and undermines any gains the couple makes. But I don’t want to blame him entirely--because frankly the hero enables this behavior and takes up for his friend over the heroine whenever push comes to shove. The heroine also lacks confidence to call out her boyfriend about this issue in any meaningful way or outright leave, though perhaps I understand why she acts the way she does more than I understood why the hero put up with this friend. (I would honestly argue he wasn’t actually in love with the heroine because that is not love. That is obsession and a sort of toxic entitlement, which displayed itself with total disrespect and disregard for women. This sort of misogyny he displayed really lowered my respect for the hero taking his part over the heroine, because he was enabling this misogyny.)

In the Now sections of the book, both the hero and his friend have been seeing a therapist about their issue. The author tries to demonstrate the characters have been working on changing, been working on their issues, but the secondary character friend immediately lapses back into old behaviors. I really disliked this character, even in parts where I was supposed to feel sorry for him. At the end of the book, when this character learns something new about the heroine, he makes a grand gesture speech that is supposed to right all the behavior and things said until now, and by then, it was too little too late for me. Mainly I worried one of the other secondary characters would try to hook up with him, that a future book will feature this guy--and I did not want any poor heroine saddled with this douche canoe.

Some reviewers have called this “chick-lit” as opposed to rom-com, which would be more appropriate, since those books are more HFN rather than HEA. The center character for this book, in my opinion, is the hero; and his character arc is to reunite with his friend (he hadn’t spoken with him in a year prior to the road trip) and his ex-girlfriend--to find resolution with these two people. When all the grievances are finally aired and understanding is reached, I would have been happy to end the book and have the characters go on their merry way to better lives. The toxicity of their relationships--I just wasn’t interested in seeing a second chance for the hero and heroine.

This story features a lot of difficult issues: depression, alcoholism, abusive relationships, toxic relationships with parents, etc, and because these topics are central to many of the characters, it only stands to reason the relationships would be messy, complicated, and not easily resolved. Forgiveness is definitely a central value to good relationships, and perhaps that is a plus about this story, but nowadays I’m too old, I think, to believe in only The One, nor think that hooking up with an ex is a great idea, since I have had enough therapy to realize they’re usually your ex for a reason.

All of this aside, I can tell O’Leary is a really good writer--her writing style is engaging and she can definitely create tension and conflict. There were a number of scenes where I was laughing at the scenarios, at the ridiculousness of the humor (I loved Kevin the Lorry Driver.) But I think this is the kind of British story that is more like Four Weddings and a Funeral, as in it’s billed as a comedy, a lark, but all you can really remember about the story is how sad you felt at the end because it was much more a downer than a HEA. Overall, though, I imagine this is not her best work; and I definitely would not recommend this as a frothy feel-good beach read. Unless you’re in your 20s and you believe in The One.

Would you take a road trip with an ex?

Have you read Beth O'Leary?

One randomly chosen person who posts a comment before 11:00 PM, June 6 will receive a print copy of The Road Trip.