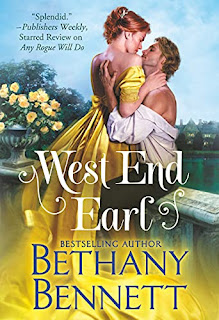 While most young ladies attend balls and hunt for husbands, Ophelia Hardwick has spent the last ten years in disguise. As the land steward for the Earl of Carlyle, she’s found safety from the uncle determined to kill her and freedoms a lady could only dream of. Ophelia’s situation would be perfect—if only she wasn’t hopelessly attracted to her employer.Calvin, Earl of Carlyle, is determined to see his sister married this season. And he’ll do it with the help of his trusted right-hand man. But when he finds out Ophelia's secret, and that her life is in danger, his priorities change. Their attraction is passionate, all-consuming, and if they aren’t careful, it could turn downright deadly—for both of them.
PJ's Thoughts:
I was dazzled by Bethany Bennett's debut, Any Rogue Will Do (click to read my review) and eager to learn more about Ethan's friend, Cal in Bennett's second book, West End Earl. Once again, Bennett pulled me into a story from the start and held me spellbound until the end. She's making a habit of that dazzle.
Bennett excels at creating fully-dimensional characters who come to life on the page. I adored Cal and was right there with him as he worked through a plethora of emotions regarding his family, his unexpected relationship with Ophelia (Phee), and the future he yearned for as opposed to the one he felt resigned to. He has a significant growth arc that tests his beliefs as well as his close relationships before he ultimately takes control of his life and learns to fight for his happiness. I loved that Ethan and Lottie (Any Rogue Will Do) were there to help him along the way. Lottie, especially, really shines in this book.
Cal's younger sister, who also has a significant role in the book, has quite the growth arc as well. I didn't like her at all during the first half of the book but the evolution of her character was very satisfying and left me eager for her story in the third book of the series.
And then there's Phee, who is without doubt the undisputed star of this book. I'm usually pretty good at ferreting out characters' secrets but not this time. There's a major twist with her character that I did not suspect at any point while reading Any Rogue Will Do. I love when an author is able to surprise me and Bennett certainly did. Phee is one of my favorite characters I've "met" this year. I love her strength, determination, cleverness, and confidence, but also her vulnerability. Bennett took her story in directions I did not expect but, in retrospect, I understood that the decisions she made were the only ones that could have ultimately brought about happy endings for multiple characters. Doesn't mean they didn't make me sweat, wondering how it would all work out. ;-)
If you're a fan of historical romance, give this new author with her fresh, sparkling, page-turning stories a try. I highly recommend both West End Earl and Any Rogue Will Do. Both books can be read as a standalone but I think reading them in order will deepen your understanding of the characters and pleasure in their journeys.
If you haven't read Any Rogue Will Do yet, it is currently $1.99 on Kindle for a limited time.
Do you enjoy characters in disguise?
Have you read Bethany Bennett yet?
What's the last book that took characters in a direction that surprised you?
One randomly chosen person who comments before 11:00 PM, June 27 will receive a print copy of West End Earl.
*U.S. only
*Must be 18
*Void where prohibited
Posted by pjpuppymom at 7:00 AM