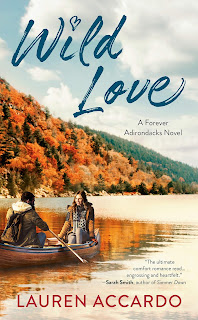 A down-on-her-luck city girl searches for new purpose among the shelves of a failing bookstore in the quaint town of Pine Ridge, New York—until a forbidden love tempts her to go off-book.When life sets fire to your happily ever after, you ditch your cheating boyfriend, trade in the city life for the off-the-grid seclusion of your mother's bookstore in the mountains...and try to resist your attraction to the brooding town mechanic you accidentally got into a fender bender with outside the local bar. Sydney Walsh might be falling head over heels for the romance novels she's stocking up to rebuild The Loving Page, but she has no delusions about actually starring in one. That chapter has closed.Beneath Sam Kirkland's gruff mountain-man exterior lies a gentle heart and a burning desire for the woman he knows he can't have. He's made promises that anchor him to the past, making romance off-limits. And he accepted that—until Sydney came crashing into his life.Sam can't do a relationship right now. Sydney doesn't have the wherewithal to believe in one. But when you meet the right person, the wrong circumstances don't matter. Even when the world seems to be doing its best to keep them apart, their real, one-of-a-kind love is worth fighting for.
PJ's Thoughts:
Wild Love is a debut novel so I went into it not knowing exactly what to expect but was mostly pleased with what I found. Sam and Sydney pulled me into their lives pretty quickly. I enjoyed the snappy banter between them and the friction that gave way to chemistry then, finally, deep feelings. Sam is such a good guy, deeply loyal and honorable. I understood the commitment he had made that prevented him from pursuing a relationship with Sydney but I was so angry with the character who took advantage of his loyalty, even as I was conflicted over my anger. Good character development there.
I enjoyed Sydney's journey, especially the evolution of her complicated relationship with her mother, and the self-reflection and growth that eventually brought her to the point where she understood and embraced the who, what, and where that brought her the most happiness. I became deeply invested in Sam and Sydney, both individually and as a couple. I hope we see their relationship continue to evolve in future books as, for me, the ending of Wild Love was a bit abrupt. Or maybe I just wasn't ready to say goodbye. I want more page time for this couple without the stress of a toxic individual between them. And I want to know why Sydney's mom calls her Suds.
The author's descriptive details brought the small town of Pine Ridge to life, including the forests, rivers, Sydney's mom's bookstore and other local businesses (picture one of those adorable, rustic, mountain towns in Hallmark movies). And many of her secondary characters added charm, a bit of quirkiness, and potential for future stories. I'm especially eager for Sam's brother, Jared's story. His book, Sweet Love, is scheduled to be released September 28, 2021.
If you're looking for a heartwarming, slightly spicy, small-town romance that tackles some serious topics and launches a new series, give this one a try. I enjoyed it enough to return to the Adirondacks for the next book in Lauren Accardo's Forever Adirondacks series.
Content Warning: Alcoholism
Do you enjoy small-town romances?
Have you ever visited the Adirondacks? (I haven't, but it's an area I've always wanted to explore.)
Have you read any debut romances lately that you would recommend?
One randomly chosen person who posts a comment before 11:00 PM, June 4 will receive a print copy of Wild Love.
*Must be 18
*U.S. only
*Void where prohibited
Posted by pjpuppymom at 8:00 AM