Review - - Sisters of the Resistance 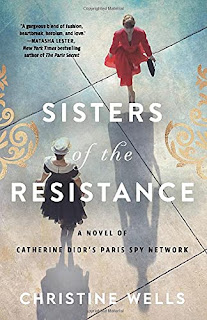 Paris, 1944: The war is nearly over, but for members of the Resistance in occupied France, it is more dangerous than ever before. Twenty-five-year-old Gabby Foucher loathes the Nazis, though as the concierge of 10 rue Royale, she does her best to avoid conflict—unlike her bolder sister Yvette, who finds trouble at every turn.

Then they are both recruited into the Resistance by Catherine Dior and swept into a treacherous world of spies, fugitives, and intrigue. While Gabby risks everything for the man she is hiding from the Nazis, Yvette must decide whether to trust an enigmatic diplomat who seems to have guessed her secret. As the threat of betrayal draws ever-closer, one slip could mean the deaths of many, and both sisters must make choices they might regret.

Paris, 1947: Yvette returns from New York to reunite with Gabby and begin life anew as a mannequin for Dior, who is revolutionizing fashion with the New Look. But first she must discover the truth behind Catherine’s terrible fate, while Gabby finds that there are many kinds of courage, and that love is always worth fighting for.

Blending fact with fiction, Christine Wells weaves a compelling tale of two sisters caught up in the harrowing, life-threatening mission of the French Resistance during the final weeks of WWII and the uncertainty of starting over in the years following.

Wells pulled me into this story from the beginning and held my attention throughout. I was fascinated by the "behind the scenes" look at the French fashion industry during and following the war, especially that of the house of Dior. I had no idea that Catherine Dior (sister to fashion icon Christian) was so instrumental in the resistance movement in Paris. Though she is not the primary focus of this novel, her involvement brings authenticity to the story and is important enough to make me want to know more about her.

Wells infused the book with enough details to bring Paris of the 1940's to life on the page. It was very easy to lose myself in the daily events of sisters Gabby and Yvette Foucher, their neighbors, co-workers, enemies, and compatriots. All of the characters are so vividly depicted that I quickly forgot who was real and who was not. I became attached to many of them, invested in their well-being, fearful when their lives were placed in danger, and anguished when their hearts were broken. Once I was immersed in their stories it was impossible to stop reading until I knew everything.

I enjoyed the fact that Gabby and Yvette were so very different and that their journeys also took different paths. It made them more real to me; gave me greater interest in the complexities of their sibling relationship and more joy in the resolution of their differences. It also made each of their romantic relationships unique and the romantic decisions they each made more authentic to their characters. I enjoyed watching them each evolve throughout the course of the book and, by the end, was very satisfied with the people they had become.

Events move back and forth between 1944 and 1947 but the switches were seamless and never left me feeling confused or pulled from the story. It's a type of storytelling that doesn't always work for me but in this instance it did. If you enjoy WWII stories that highlight the courage of women who put their lives on the line for the survival of their country and freedom of their fellow citizens, I recommend you add Sisters of the Resistance by Christine Wells to your reading list.