Review - - To Tempt a Scandalous Lord

To Tempt a Scandalous Lord
by Liana De la Rosa
Once Upon a Scandal - Book 4
Publisher: Entangled:Amara
Release Date: June 21, 2021
Reviewed by PJ 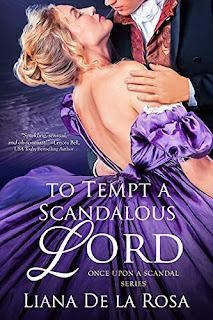 Alicia Lindsay, the dowager Countess Lindsay, has spent her life under the dominion of men-- leered at yes, but ultimately silenced and cast aside. But widowhood has granted her the freedom to voice her critiques against injustices in articles that have enraptured the nation. Resolved to bring about political change, Alicia's investigation of the newest party candidates leads her to the captivating, hardheaded Lord Inverray. She's unprepared when he proves to be not only charming but chivalrous when a slight wardrobe malfunction--with all eyes of the ton upon them--forces her to accept his proposal. Now she's keeping a huge secret from her soon-to-be-husband.
Niall Campbell, Marquess of Inverray, has spent years finding support for numerous legislations to help his fellow Scots. Now poised to grasp the party leadership, his success has been threatened by anonymous articles critiquing his campaign. Niall vows to find the author and silence them, no matter the cost. But when he finds himself engaged to an alluring widow with a sharp tongue, his plans get derailed in more ways than one...
PJ's Thoughts:
To Tempt a Scandalous Lord is the fourth book of a series but stands wonderfully well on its own, even though couples from the previous books make appearances. Meeting those couples shouldn't confuse readers though it might make you want to discover more about them by reading their books.
One of the things I enjoy about De la Rosa's books is how she weaves pertinent issues of the day into her stories. In this one, both Niall and Alicia are politically-minded individuals, willing to use their words and actions to advance necessary reforms to benefit the disadvantaged population of England, especially children. The author's research shines in the way she presents the issues as a natural part of the story. She expands my knowledge of the time without me feeling like I've sat through a history lesson.
Having a hero and heroine who barely know one another and are just beginning to acknowledge the desire they're feeling when they're "compromised" opens many opportunities for those characters to evolve, both individually and as a couple, something this author takes full advantage of. It also allows the reader to learn about the characters as they are learning about one another, making me feel like I'm traveling their journey to love and understanding with them. I like how Alicia and Niall challenge each other's beliefs, how they are open to listening and learning, even if some of the lessons are difficult to hear and take time to sink in. They both have significant growth arcs, and difficult decisions, that solidified my affection for them and my belief in their hard-won happily ever after.
I typically don't enjoy one half of a couple keeping a (huge) secret from the other but I understand why Alicia feels she has no choice. Women of that time were too often, and too easily, silenced and she has important things to say. I was in her corner, cheering her on the entire way.
I will say that I found the first few chapters of the book to be a bit sluggish. If you have that same experience, I encourage you to keep with it. Once the book hits the 25% mark, the pace picks up. From that point on, I was fully invested and eagerly flipping pages until I reached the end.
If you enjoy historical romance with fully-developed characters, well-researched historical detail, witty banter, realistic issues, and a slow-burn romance, give this one a try.
Posted by pjpuppymom at 6:00 AM