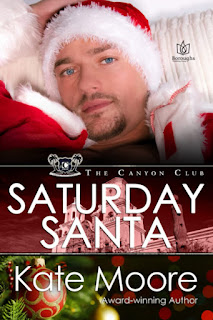 A prince of privilege, Jack Ryker returns to LA determined to stop an enemy he unleashed from his past. Christmas is the last thing on his mind when he takes refuge in a house high above the ocean guarded by a team of security experts.

Scarred and trapped in a specially made chair, every day from his beachside window Jack watches a beautiful woman coax a faltering old man on their daily walk. Jack doesn't know why, but he’s determined to meet her.

Mari Lynch loves her job directing events at an upscale mall, especially at Christmas. This year her cheer plummets when a stroke prevents her grandpa from being the mall's favorite Saturday Santa. Forced to find a replacement, she's at a loose end.

Jack and Mari's worlds collide and he topples her ideas about dating while she thaws his frozen heart. The truth about his past stands between them, and could cost Mari her life.

When Jack’s enemy comes after the woman he loves, he knows now he truly has everything to lose.

I could not put this one down. Kate Moore has crafted a compelling story filled with action, suspense, poignant moments, and heart-tugging romance that held me enthralled from start to finish. The story begins at a steady pace, ramping up gradually as Jack and Mari come to know one another then growing more intense as the life-or-death stakes of Jack's life become more immediate...and Mari is caught in the middle.

Moore's character development, dialogue, and depth of emotion pulled me in, eliciting my emotional responses right along with the characters. The secondary storyline involving Mari's grandfather added another emotional layer that caused me to be even more invested in her character while the gradual unveiling of Jack's past as well as the effects of his experience overseas created a character who so deserved a happy ending. There were many points in this book where I just wanted to hug him. Also, I loved his personal twist near the end. I was not expecting that but it only made him more endearing in my eyes.

This is the third book of a trilogy with the couples from books one and two playing secondary roles in this one. Not having read those books (yet), I can't say with certainty if readers would have a greater understanding of Jack by reading the series in order. I can, however, say that I never felt confused or out of the loop while reading Saturday Santa and having "met" the other couples I'm looking forward to now reading their books as well.