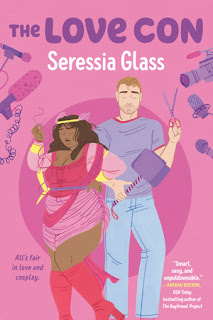 He’s cosplaying as her boyfriend but their feelings for each other are real in this romantic comedy from Seressia Glass.Sometimes Kenya Davenport believes she was switched at the hospital—how else could a lover of anime, gaming, and cosplay come from STEM parents? Still, Kenya dreams of being able to turn her creative hobby into a career. She finally has a chance to make it big when she joins the reality show competition Cosplay or No Way.There's just one catch: the challenge for the final round is all about iconic pairs, and the judges want the contestants' significant others to participate. Unfortunately, Kenya is as single as can be at the moment. Luckily her best friend, Cameron Lassiter, agrees to be her fake boyfriend for the show.Roleplaying a couple in love will force them to explore what they're hiding under the mask of friendship. Can Kenya and Cam fake it until she makes it, or will she be real about her feelings, knowing it could cost her the best friend she’s ever had?
Nancy says:

Since then, the timing hasn’t been right even though they’ve shared an apartment for years. They’ve also worked together at Cam’s fabrication shop, Make It Worx, where Kenya is a silent partner. Now, though, neither is dating anyone, they’re thrown together for the cosplay contest (think Project Runway for geeks), and they’re pretending they actually are in the relationship they both secretly yearn for.

The cosplay contest is the external plot, but the romance dominates the story. The romantic arc has complications, of course. Kenya’s parents disapprove of her cosplay interests, which Cam has always shared. They believe she should get a real job, meaning one in her field, engineering, and outgrow this childish cosplay stuff.

On top of that, one of the three contest judge seems to have it in for Kenya, always emphasizing the downsides of what she does and implying criticism of her weight. As you can tell from the cover, Kenya is a plus-size heroine (who also loves pink). Kenya deals with this woman’s borderline-snide comments by emphasizing her work on the project. She knows any show of temper will have her branded the Angry Black Woman. Her awareness of this potential trap permeates her reactions to the judge and to the equally critical producer who leads the camera crew following Kenya as she prepares for the final round.

Glass handles Kenya’s reactions in a way that makes me aware of the problem and sympathetic to Kenya but without letting Kenya’s concern over the stereotype dominate the story, or even the conflict.

The developing romance interweaves emotion and very hot sexual tension with tenderness and trust as Kenya and Cam take the first tentative steps toward making their pretend relationship real. When Cam’s ex tries to make trouble, the camera crew gets it all on film, and the things she says make Kenya question whether what she and Cam believe they feel is genuine. A subsequent conversation with her parents makes her doubt worse.

Kenya’s parents are my only quibble with the book. She agrees to give up cosplay and get an engineering job if she doesn’t win the contest. I have a little trouble with a self-supporting adult making a bargain like that, but parental disapproval, the desire to prove oneself, can be a powerful motivator. The parents’ attitude about comic books and all things related was common when I was growing up, so I can see how someone really devoted to those interests could feel pushed into a corner.

As a lifelong geek, I recognize many of the references to comics and science fiction in the book. Readers who aren’t familiar with those references, however, will know what they relate to, and that’s more important than the particulars. I especially like the reference Anubis, which reminds me of Glass’s use of Egyptian mythology in her wonderful Shadowchasers urban fantasy trilogy.

The story moves at a good pace, with interesting details on cosplay costume creation sprinkled through it. The supporting cast are well drawn, especially Kenya’s friend Janelle and the two guys who work at Make It Worx, Mack and Javier. One judge is petty and mean, but the other two are fair-minded and positive. Even Kenya’s parents, unsympathetic as they are to her goals, are clearly doing what they think best out of concern for both Kenya and Cameron.