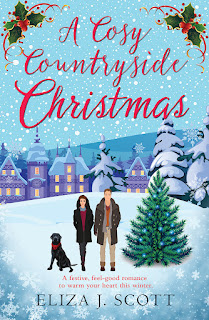 Ella Welford’s done with love. After having her fingers burnt, she’s been resolutely single for the last year and has sworn to stay that way.
Joss Campion’s still reeling from a messy divorce and has vowed never to open his heart to love again.
Growing up in the picturesque village of Lytell Stangdale, with the North Yorkshire Moors as their playground, Joss and Ella were best friends. The pair were inseparable.Until the day something happened to ruin their friendship and Joss moved away.An urgent telephone call summons Joss back to the village. His father’s been rushed to hospital and he’s needed to run the farm. When he returns, with his loyal canine companion, Sid, in tow, it isn’t long before he realises things aren’t as they seem. Why is his brother, Rich, being so evasive? And why does he get the impression the farm’s in trouble?
Teaching Assistant, Ella, has just broken up for the Christmas holidays and is looking forward to spending more time on her parents’ farm, tending her variety of rescue animals and recharging her batteries.It isn’t long before the pair run into one another and sparks of attraction begin to fly - not that either of them will admit to it. But, just before Christmas, they find themselves thrown together in an unexpected turn of events as a fierce snow blizzard rages around them.Could this be the moment that changes everything? Or is their past too big to ignore?One thing’s for certain, life’s never dull in this little corner of the North Yorkshire Moors.
PJ's Thoughts:
I enjoy second-chance romances, especially when there's a solid foundation of friendship at their core. In this book it isn't only the reunion of childhood friends Joss and Ella that plays out against the small-town backdrop but also the reunion of estranged family.
It's clear early on that this book is part of a long-running series with many community members in the forefront of the story. Scott does a commendable job of threading other couples in and out of the story without taking primary focus away from Joss and Ella or causing confusion for readers who haven't read the earlier books (like me).
I enjoyed the strong community spirit, the secondary characters who helped move the story forward, and the development of Joss and Ella, both as a couple and as individuals. I especially enjoyed the evolution of Joss's relationship with his father and the light thread of suspense involving his brother. Both were relatable and realistically portrayed.
There is a thread in the first part of the book, however, involving Joss and a secondary character, that I did not enjoy. What happened, and how it was handled afterward, did not feel authentic to what I knew of Joss's character at that point and definitely impacted my feelings about him. The characters came to terms with what happened (very quickly, it seemed) but what occurred felt gratuitous to me and continued to have a negative impact on my enjoyment of Ella and Joss's relationship. I was happy for them at the end of the book, and other readers may not share my reservations, but my happiness was tempered by a shadow that, for me, still hovered.
That quibble aside, my overall enjoyment of the book was enough to encourage me to seek out the earlier books in the series. I enjoyed this little village and there are several couples whose stories I would like to read.
Posted by pjpuppymom at 5:00 AM