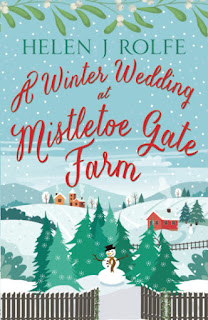 It's almost Christmas in Heritage Cove - the village tree is all lit-up, the bakery is full of festive treats, the tea rooms and waffle shack are welcoming locals inside out of the cold, and for some of the residents of the Cove, snow might not be the only thing they're wishing for this year...Tilly is overjoyed when an estranged relative comes to Heritage Cove wanting to make amends. But as she lets him in to her life and Tilly’s Bits ‘n’ Pieces - the shop she owns and loves - her friends aren’t so sure whether everything is quite as it seems.Benjamin’s parents run Mistletoe Gate Farm, selling Christmas trees, wreaths and mistletoe. Benjamin has always thought his family was as firmly rooted in the ground as the rows of Norway Spruce and Fraser Firs. But when he finds a letter that rocks his world he realises he may not be able to do anything to prevent the changes coming their way.Benjamin and Tilly have been falling for one another since the summer but will family complications put an abrupt stop to what is looking like a burgeoning romance?With festive cheer weaving its way through the Cove as two local favourites plan their wedding, there’s more than one relationship that could receive a little Christmas magic…
PJ's Thoughts:
This was a delightful introduction to the community of Heritage Cove. Rolfe immerses readers into small-town British culture with intriguing characters, festive events, and heartwarming stories.
I immediately connected with both Benjamin and Tilly as they navigated the treacherous waters of their respective family dramas while also dipping their toes into a sweet, tentative romance. They felt like people who could have been my neighbors growing up. I also enjoyed the touch of suspense that Tilly's uncle brought to town as well as the reconciliation his actions brought about.
This is the fourth book in Rolfe's Heritage Cove series and while I enjoyed it as a standalone I think that enjoyment would have been enhanced had I read the earlier books first. There's a rather large secondary cast of characters with stories and events that are alluded to throughout the book. At times, I felt like I was on the outside looking in. But, having said that, the author certainly has me intrigued enough to search out their books as well.
If you enjoy heartwarming holiday stories with a sweet, closed-door romance, complicated family dynamics, and a community of interesting characters who stand ready to help and support one another, give A Winter Wedding at Mistletoe Gate Farm a try. I'll be going back for more from Helen J. Rolfe's Heritage Cove.
Posted by pjpuppymom at 7:00 AM