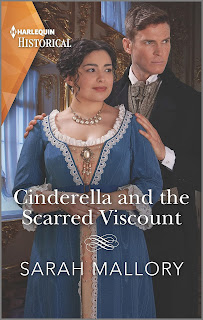 An imperfect proposal…But a perfect match?Major James Rossington, Viscount Austerfield, survived Waterloo, but can he survive the season as London’s most eligible bachelor? Convinced his battle scars make him unlovable, and to escape society’s matchmakers, Ross proposes a wedding in name only to shy, sensible Carenza Bettridge. Liberated from her cruel stepmother and bullying half sisters, she blossoms into a confident, altogether desirable woman. He promised Carenza a convenient marriage but inconveniently finds himself wanting more…
PJ's Thoughts:
This was my first book by Sarah Mallory but, after reading Cinderella and the Scarred Viscount, I will definitely be checking out her other titles. This marriage-of-convenience, Cinderella-themed historical romance is one I enjoyed.
Mallory's vibrantly-depicted, fully-developed characters come to life on the pages of this book. I felt an immediate affection for Carenza that never wavered. I admired her kindness in the face of the years of mistreatment from her step-mother and half-sisters but also cheered her evolution as she slowly gained confidence and began to take control of her life.
Ross's evolution is also an important part of this couple's journey. I thought his PTSD was realistically portrayed throughout the story, adding depth and complexity to his character. Also, I appreciated the slow burn of his relationship with Carenza, moving their journey forward at a gradual, realistic pace with no quick and easy, fairy-tale solutions. By the time they reached the conclusion of their journey, I was fully convinced of their mutual love and confident of their future together. Thanks to the author for the endearing epilogue that confirmed my wishes for these two...and the others.
The villains of the piece were as vibrantly depicted as the main characters, only in a negative, I'd-like-to-throw-you-off-the-nearest-cliff, kind of way. Mallory gave me protagonists I could love and antagonists to despise in equal measure.
If you enjoy characters who not only survive what life has thrown at them but triumph over adversity, finding love and happiness in the process, give Cinderella and the Scarred Viscount a try.
~~~~~~~~~~

Sarah Mallory is an award-winning author who has published more than 30 historical romances with Harlequin Mills & Boon. She loves history, especially the Georgian and Regency. She won the prestigious RoNA Rose Award from the Romantic Novelists Association in 2012 and 2013. Sarah also writes romantic historical adventures as Melinda Hammond. Sarah lived for many years on the Yorkshire Pennines, taking inspiration from the wild and rugged moors. Then in 2018 she fell in love with Scotland and ran away to live on the rugged North West Coast, which is proving even more inspiring.