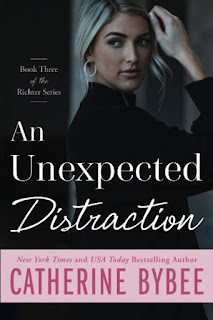 Jacqueline “Jax” Simon knows how to expose secrets: she’s a skilled operative with MacBain Security and Solutions. When Jax hears her parents are divorcing, she races to London to find out why. She’s determined to learn the truth, especially when her investigation uncovers why her parents sent her to Richter, the German military school that made her a fighter.

Andrew Craig collects Jax at Heathrow Airport as a favor. He’s heard she’s a handful, but he didn’t know she’s dangerously gorgeous too. His instant attraction could change his life…or end it.

Jax doesn’t want to fall for Andrew, but soon he’s worming his way into her life. Together, they infiltrate Richter to discover if it has returned to its covert purpose: training children to be spies and assassins and blackmailing parents to look the other way. As the attraction between the two intensifies, so do the secrets exploding all around them. How deadly are those secrets—and who will survive?

Catherine Bybee hits it out of the park with another heart-tugging, breath-stealing story that kept me glued to the pages from start to finish. From the early meet cute to the explosive conclusion, I was so deeply immersed in the lives of these characters that I completely lost track of time.

I really enjoyed Andrew. I loved his personality, his playfulness, and his absolute respect for all the facets of who Jax is. The chemistry between these two sizzles, as does the banter. Their scenes in Germany show how great a couple they are, in all situations.

Jax is a very complex character. It was fun to peel back the layers and watch her evolve both personally and professionally. I enjoyed the multi-layered relationships within her family and how that all played out, especially her changing relationship with her mother.

The suspense portion of the book is well plotted, with plenty of red herrings to keep me guessing. There's a suspense sub-plot that is concluded within this book but also an overlying one that will continue to play out in future book(s). I am fully invested in the outcome and will be buying all future books in this series. She has me hooked!

This is the third book of a series with a romantic thread that stands on its own and offers a happy ending in this book. The suspense thread, however, is part of an arc that continues throughout the series and, while the portion pertaining to Jax and Andrew is concluded in this story, there were times when I felt I was missing critical information that would have deepened my understanding of the overall mystery. For that reason, and also to better understand some secondary characters whose stories have already been told, I would suggest reading the books within the series in order. I have already downloaded book one, Changing the Rules, and book two, A Thin Disguise, and will be reading them soon. All three are available for purchase or in Kindle Unlimited.

Andrew stood aside, put his beverage down. “I’ll walk you out.”

Outside the bar, the cold, damp London air snapped her spine straight.

“Where is your car?”

Jax pointed across the street and up toward her brother’s place. “I’m capable of getting there on my own.”

“I would suspect anyone who jumps out of airplanes and plays on America’s military bases is capable of more than crossing the street.”

“Then why are you out here?”

The light turned green and they started walking.

“Your investigation. That’s why Harry asked you to come, isn’t it?”

“Is that what he told you?”

“He told me he needed family reinforcements to get his dad to move out of his flat.”

That sounded like the words her brother would use.

“I have a feeling my father is going to be just as helpful putting this to rest as my mother.”

“He didn’t seem excited to see you.”

“Thank you for pointing that out.”

Andrew paused his step. “I’m sorry. That was insensitive.”

She stopped, turned to look at him. “I’m pretty sure I remember telling you my family was cold. Back when I thought you were a driver who didn’t know them personally.”

They crossed another intersection, and she slowed her pace as the rental car came into view.

She wondered if there was a way for Andrew to help her. “Do you work with my dad?”

He shook his head. “No. I’m in finance, but with the private sector. Hedge funds have no appeal to me.”

“There’s more money in it.” Jax stopped at the car.

“And less quality of life. Look at your brother, he doesn’t have any hair left.”

Andrew reached out his hand.

She looked at it.

He wiggled his fingers as if asking for something. “Your phone. In case you need backup.”

He pointed to his chest. “But only one of me.”

That sounded like a line. But she handed him her phone anyway.

He pressed a button to power it on, then turned it toward her so it would open.

A sly smile sat on his lips as he put in his phone number.

When his phone buzzed, he silenced it quickly, obviously pleased with himself.

Jax narrowed her gaze, saw the same attraction she had the night they’d met. “I’m not here for that.”

“I don’t know what you’re talking about.” His eyes twitched. His smile grew.

Instead of calling him out, she reached for her keys.

He opened the door and waited for her to get behind the wheel “Petrol,” he said.

Jax looked up at him, confused. “What?”

“My last credit card transaction was at the petrol station.”

It was hard not to smile. “You’re an interesting man, Andrew.”

He leaned down with a knowing smile. “You have beautiful legs, Jax.”

She was blushing . . . she could feel the heat in her cheeks.

He closed the door and stepped back.