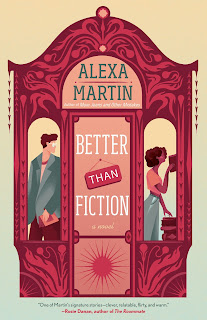 As a self-proclaimed book hater and a firm believer that the movie is always better, Drew Young didn’t anticipate inheriting her grandma’s bookstore, the Book Nook. She’s in way over her head even before the shop’s resident book club, comprising seven of the naughtiest old ladies ever, begin to do what they do best—meddle.

Bestselling author Jasper Williams is a hopeless romantic. When he meets Drew at his Book Nook signing event, he becomes determined to show her the beauty of reading. He curates a book bucket list in exchange for her help exploring the local Denver scene for his current manuscript. From going river rafting to trying local restaurants, Drew begins to connect with Jasper in a way she only thought happened in fiction.

When messy family ties jeopardize the future of the Book Nook, Drew is caught between a bookshelf and a hard place. She’s reminded that real life isn’t always big dreams and sweeping romance. But Jasper is the plot twist she never saw coming and he’s writing a happily ever after just for them.

I have mixed feelings about this book.  By the middle of page 1, I disliked the heroine so much that I was ready to put it down. I had committed to review it, though, so I read on. By the end of the chapter, I was beginning to like her better. After several more chapters, as I read more of her background and her motivations, I understood her and sympathized with her.

Whether a reader likes a character is mostly subjective, so others may respond to Drew differently than I did. For me, her griping about college loans and college being useless off the bat (which never matter at any point in the plot and so left me wondering why the book started there), her apparent dislike of being stuck in a business she didn’t want to own but not seeming to have any plan to do anything about that, and her stock of rote responses to customers in place of genuine interaction left me cold. The only thing about her I liked on the first page was the customer’s sympathy over the loss of Drew’s grandmother and Drew’s genuine reaction to that.

I warmed up to Drew a little when her late grandmother’s friends, older women who call their book club the Dirty Birds arrive in the store, and she seems glad to see them despite some resentment of their interference. When Drew thinks about why she loves photography more than books, that’s relatable. As the story progresses, we learn the photography she misses was actually not a hobby but a budding career. This isn’t made clear until the subject has come up several times. We know she loves nature photography, has won prizes, and was talking to a television station about a regular segment, but all that fits a hobbyist as well as a careerist.

So I often found myself wondering why Drew doesn’t look for another job and let her apparently very capable employee and part-timer run the bookstore. Only when we learn that she feels keeping the store open is a way to keep her beloved grandmother with her does this make sense to me.

One factor in Drew’s attitude toward the Book Nook is her stated dislike of reading. She doesn’t believe happy endings are for her and resents books that try to tell her they are. Many readers feel that way about romance, so it’s entirely believable with regard to romance novels. A bookstore, though, carries many, many other kinds of books that have nothing to do with happy endings, so this didn’t ring true as a reason to avoid all books.

Also in Drew’s favor is her kindness to her half-sister, Daisy, despite Drew’s envy of Daisy’s very different relationship with their father, who mostly abandoned Drew and her mother and didn’t even pay child support until his second wife took over writing the checks. Daisy’s warmth and obvious desire to do things together touch Drew and lead to their forging a new and much closer relationship. When Daisy forms an alliance with Drew’s best friend, Elsie, Drew finds herself outnumbered as she tries to stay in her shell.

The Dirty Birds bring the male lead in the story, bestselling romance author Jasper Williams, to the store. He’s unexpectedly hot and unexpectedly interested in Drew. She’s socially awkward, almost to the point of being rude, but because we see her internal reactions, we can sympathize.

Jasper intends to stay in Denver while he works on his next book, which is set there. He asks Drew to help him learn the area, and they strike a bargain. She’ll take him on adventures in the area. In return, for each book she reads from his list of suggestions, he’ll arrange an activity designed to make her like books.

I think many readers can relate to Drew’s “how can this hot guy like me?” feeling and her waiting for the other shoe to fall. When it does, it comes in a clever, credible way that was seeded early in the story. The resolution to the romantic conflict is cleverly done and ties into Drew’s love of photography and her adventures with Jasper.

The villain of the book is Drew’s father, who’s angry that his mother left the store to Drew and not to him. He’s determined to get it away from her. His irrational anger, especially since he seems to be very prosperous, didn’t entirely make sense to me. I was also put off by the easy way Drew’s grandmother’s attorney blabbed about his conversations with her about Drew and the store. I would’ve been more comfortable if the attorney offered some nod to why it’s not a breach of confidentiality for him to share this info.

Overall, the book has a rough start. The supporting characters and the hero were, for me, initially more endearing than the heroine, but I warmed to her as the story went on and was solidly rooting for her by the end of Chapter 5.

Have you read Alexa Martin?

If you don't relate to/like a character early on in a story, do you give up on the book or continue reading?

One randomly chosen person posting a comment before 11:00 PM, November 6 will receive a print copy of Better Than Fiction.