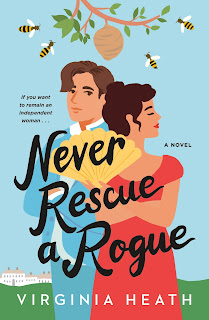 Diana Merriwell and Giles Sinclair only tolerate one another for the sake of their nearest and dearest. Everyone believes that the two of them are meant to be together, but Diana and Giles know that their constant pithy barbs come from a shared disdain―not a hidden attraction. Diana loves the freedom of working at the newspaper too much to give it up for marriage, and Giles is happily married to his bachelor lifestyle. But they do have one thing in common―the secrets they can’t risk escaping.
When Giles’ father, the curmudgeonly Duke of Harpenden unexpectedly turns up his toes, it’s only a matter of time before someone comes crawling out of the woodwork who knows the true circumstances of his only son's birth. As the threat of blackmail becomes real, Giles must uncover the truth of his parentage first, or else he and all those who depend upon him will be ruined―and dogged bloodhound Diana is his best hope at sniffing out the truth. As Giles and Diana dive into his family’s past, the attraction that the two of them insisted wasn’t there proves impossible to ignore. Soon, the future of the Sinclair estate isn’t the only thing on the line…
PJ's Thoughts:
This book was an absolute delight. I adored both Giles and Diana, staunch frenemies with their pithy comments, charmingly insulting nicknames, and witty banter. They challenge one another at every turn while below the surface, unwanted feelings swirl. Everyone around them knows they're a perfect match. The question is when - or if - the two of them will ever clue into that fact.
Giles and Diana are one of my favorite types of pairings. He's the best friend of her new brother-in-law, an unrepentant, flirtatious, mischievous ducal heir giving the appearance of having not a care in the world while protecting hidden depths behind the persona that he presents to the outside world. She's the witty, sarcastic, ferociously independent daughter of a Clerkenwell forger, forced to make her own way in the world and rightly suspicious of most men. Both characters are well developed and layered, engaging my emotions, and my support. They made me laugh out loud while also tugging at my heart. Neither is interested in marriage. Both find themselves reluctantly falling for the other. But there are obstacles - big obstacles - blocking the path to a happy ending. They'll have to work together first to solve a potentially life-altering mystery while circumventing meddling family, a cheeky butler, and thwarting a devious threat from the past. It's a blend of mystery, adventure, and romance wrapped in a fun, heartfelt, satisfying journey that kept me grinning, sighing, gasping, and snickering all the way to the end, cheering them on to vanquish the villain and embrace their love without losing themselves in the process. These two are great on their own...even better together.
This is the second book in Virginia Heath's The Merriwell Sisters trilogy. You could begin with this one and not be confused but because of the continuing cast of characters and their evolution over the course of the two books, I'm glad I began with book one, Never Fall for Your Fiancée. Click to read my review.
Next up will be youngest sister, Vee's book. She really shines as a secondary character in Never Rescue a Rogue. After witnessing her growth in this second book, I'm even more eager to discover what Heath has in store for her. I'm hoping that a new character introduced in this book will have a role in her story. I felt a frisson.
Tour Giveaway:
a Rafflecopter giveaway

Author Bio – When Virginia Heath was a little girl it took her ages to fall asleep, so she made up stories in her head to help pass the time while she was staring at the ceiling. As she got older, the stories became more complicated, sometimes taking weeks to get to the happy ending. Then one day, she decided to embrace the insomnia and start writing them down. Twenty-five books and three Romantic Novel of the Year Award nominations later, and it still takes her forever to fall asleep.