Review - - Paris Daillencourt is About to Crumble 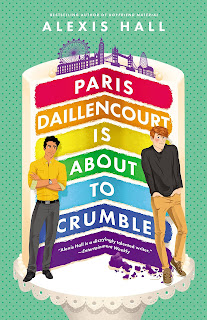 Paris Daillencourt is a recipe for disaster. Despite his passion for baking, his cat, and his classics degree, constant self-doubt and second-guessing have left him a curdled, directionless mess. So when his roommate enters him in Bake Expectations, the nation’s favourite baking show, Paris is sure he’ll be the first one sent home. But not only does he win week one’s challenge—he meets fellow contestant Tariq Hassan. Sure, he’s the competition, but he’s also cute and kind, with more confidence than Paris could ever hope to have. Still, neither his growing romance with Tariq nor his own impressive bakes can keep Paris’s fear of failure from spoiling his happiness. And when the show’s vicious fanbase confirms his worst anxieties, Paris’s confidence is torn apart quicker than tear-and-share bread. But if Paris can find the strength to face his past, his future, and the chorus of hecklers that live in his brain, he’ll realize it’s the sweet things in life that he really deserves.
Santa Says:

Paris Daillencourt Is About to Crumble by Alexis Hall is a four-star read. Yes, the title is a bit of a mouthful but in a delicious way. It is the second book in the Winner Takes All series. It can easily be read as a stand alone. The only characters that return are the production staff and hosts of the Bake Expectations (love the name) baking competition. Yes, there are echoes of one of my favorite shows, The Great British Bake Off! Both shows take place at lovely estates in England.

Paris Daillencourt finds himself entered into the show by his well meaning flatmate Morag. Paris is an avid home baker. He loves baking as it soothes him both from his studies in classics at university and, well, life in general. Paris is socially awkward and I felt so badly for him. His anxiety level and sense of self worth are especially magnified through every baking challenge judged by both the judges and in the eyes of the viewing public. Once the season airs, each triumph and presumed (by Paris) failure is dissected by social media which can be as vicious as the meanest schoolyard bully.

The only bright spot in all of his anguish is Tariq Hassan, a fellow contestant at Bake Expectations. It is one of the best cute meets I have ever read. It will nearly knock you out! (Wink! Wink!) Tariq is the exact opposite of Paris in every way. Tariq exudes a confidence that Paris feels he could never match. He has a great family who support and love him. Paris’ relationship with his parents is definitely one sided. Tariq is attracted to Paris and is not afraid to let him know it. They begin a relationship that is a revelation to Paris in so many ways.

However, this is not a story of true love conquering all. Paris for all his endearing qualities can't seem to get out of his own way. His anxieties and insecurities prove to be too much for Tariq especially when Paris, centered on his own failures, cannot celebrate Tariq’s triumphs with him. As much as it pains him, Tariq steps away from Paris. And Paris has a moment of reckoning where he is forced to recognize that his anxieties and self doubts are something more. He faces his mental illness and finally gets the help he needs.

I am becoming a fan of Alexis Hall’s books. I have read several of his other series and quite enjoyed them. I think that for this book, Alexis Hall takes this story far beyond romance to a novel about how to become our true selves. Paris discovers that he is a person of worth and value. That he is more than his own personal experiences. Something that the people around him namely his flatmate and friend, Morag and his professors knew all along. And, fear not, Tariq and Paris do come together in the end in a very satisfying happy together for now or HTFN. Not as catchy as a HEA but I think Paris and Tariq are headed in the right direction. After all, the best bakes are those that have proofed long enough to produce the best bakes.