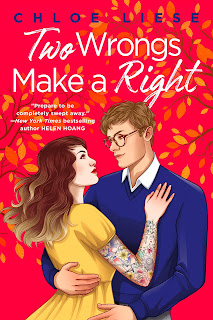 Jamie Westenberg and Bea Wilmot have nothing in common except a meet-disaster and the mutual understanding that they couldn't be more wrong for each other. But when the people closest to them play Cupid and trick them into going on a date, Jamie and Bea realize they have something else in common after all—an undeniable need for revenge. Soon their plan is in place: Fake date obnoxiously and convince the meddlers they’re madly in love. Then, break up spectacularly and dash everyone's hopes, putting an end to the matchmaking madness once and for all. To convince everyone that they’ve fallen for each other, Jamie and Bea will have to nail the performance of their lives. But as their final act nears and playing lovers becomes easier than not, they begin to wonder: What if Cupid’s arrow wasn’t so off the mark? And what if two wrongs do make a right?
Santa Says:

Have you ever been drawn into a book from the very first page? Two Wrongs Make A Right by Chloe Liese is just that kind of book. It is a five star read for me and ticks off so many boxes for me. First and foremost for me, it is a wonderfully crafted re-telling of my favorite Shakespearean play, Much Ado About Nothing. Hello! Beatrix and Benedict or in this case Bea and Jamie. Benedict is his middle name but more about that in the book. There is even the exchange of letters like in the play in the form of texts. Just lovely. Second, fake dating for revenge. Brilliant! What could go wrong? Nothing if you don’t end up actually falling in love. Right? Once they embark on this fake dating, delicious shenanigans ensue.

There are so many laugh out loud moments in the book. The dialog is witty and engaging. Each chapter is written from Bea and Jamie’s point of view. Their first encounter is stiff and awkward. Bea is neuro-divergent and navigates social situations awkwardly. She is an erotic artist. Jamie is a straight backed professional but also equally awkward in social situations. For every bit that they are different they discover how much they have in common. And the attraction is off the charts. Big points to Jamie as a classic romance hero. He’s a gorgeous baby doctor who saves geriatric cats. Bea’s artistry comes alive on her body as her tattoos express who she is as an individual. They grow beautifully together.

Their relationship grows so organically that revenge dating becomes real dating and real love. But the forces that bring them together namely her twin sister Juliet and her fiance’ Jean-Claude. This guy’s a piece of work. They also wreak havoc on their world, The fall out from her twin sister’s love life threatens theirs. This was crushing to me but, in the end, all things are set to rights. And all’s well that ends well.  I know, I know. Different play.

I have to say this one’s a keeper for me. I also intend to glom Chloe Liese’s blacklist. I hope this is the first in a series because there were some other characters in the book whose stories I’d like to read. I’m looking at you Chris, Kate and Juliet.

Have you read any books by Chloe Liese?

One randomly chosen person who posts a comment before 11:00 PM, November 24 will receive a print copy of Two Wrongs Make a Right.