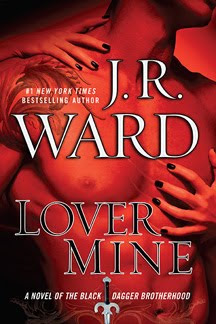 I have often referred to J.R. Ward's Black Dagger Brotherhood series as "book crack." Lover Mine, the eighth book in this phenomenal series, continues to feed my addiction in a big way! Fans finally get John Matthew's story and it is most definitely worth the wait.

John Matthew has come a long way since he was found living among humans, his vampire nature unknown to himself and to those around him. After he was taken in by the Brotherhood, no one could guess what his true history was --or his true identity. Indeed, the fallen Brother Darius has returned with a different face and a very different destiny.

Xhex, a symphath assassin, has long steeled herself against the attraction between herself and John Matthew. Having already lost one lover to madness, she will not allow the male of worth to fall prey to the darkness of her twisted life. When fate intervenes, however, the two discover that love, like destiny, is inevitable between soul mates.

The story begins just four weeks after the end of Lover Avenged, and John Matthew is searching for Xhex, who has been abducted by Lash, John's nemesis and the son of the evil Omega. John fears that Xhex is no longer alive and the thought that she may have died, especially at the hands of Lash, is driving him mad. But he channels his grief and anger into a stronger-than-steel determination to find Xhex no matter the cost. With his body guard, Qhuinn and friend Blay at his side, John Matthew searches the streets of Caldwell every night, praying that he will find a clue to Xhex's whereabouts.

Xhex is being held in Lash's brownstone, the victim of some sort of cloaking spell where only Lash can see her. Growing weaker by the day from fighting off Lash and the lack of blood that her vampire half requires, Xhex begins to doubt that she will ever escape, that she will die at the hands of her enemy. Her despair reaches a crescendo when the John and the Brothers come to the brownstone searching for her, and while she can see them, they cannot see her or hear her screams. When she sees the agony on John Matthew's face when he thinks he has failed to rescue her, her heart aches.


For all of her life, Xhex's heart had not been prone to breaking. She'd long suspected that it was a result of her symphath side, a kind of congenital condition that hardened her about things that most females lost it over.

Turned out that was wrong, however.

As she stood beside John Matthew, and watched his huge body crumple down by the bed, the organ that beat behind her sternum shattered like a mirror.

She was utterly and completely ruined as he cradled that pillow like it was a newborn, and in this moment of his utter despair, she would have done anything to ease his pain: Even though she had no idea why he felt the way he so clearly did, the reasons were unimportant.

His suffering was paramount.

But fate is on Xhex's side, and she manages to escape. John Matthew finds her at her apartment, bruised and bloodied, so he takes her back to the Brother's mansion so Doc Jane (Vishous's mate) can take care of her injuries. Seeing the female he loves broken tears John apart and makes him want to destroy Lash even more. But his primary concern is Xhex and seeing that her physical and emotional scars are healed.


Outside, he got up on the hospital bed first and it felt like the most natural thing in the world for him to open his arms wide. If he'd thought about it, he wouldn't have made the gesture, but he wasn't thinking.

Because she came to him as the spraying water in the shower had, drenching him in a warmth that leached through his skin and into his marrow.

But of course, Xhex went even further through him that that. She always had.

Seemed like he'd lost his soul to her the very first time he'd laid eyes on her.

As he clicked off the light and she settled even closer to him, it felt like she was burrowing right into his cold heart and setting up shop, her banked fire thawing his soul out until he took the first honest-to-God deep breath in months.


Xhex now joins forces with John and the rest of the Brothers, continuing to hunt and kill the Lessers and to find and destroy Lash. She knows that until she wields the dagger that pierces Lash's black heart, she will never find the closure that she needs. As tough and fiercely strong as Xhex is, will she have the courage to admit her love for John Matthew and begin a life with him as his mate?

Lover Mine is packed with action, danger, mystery and scorching hot love scenes. While Xhex and John Matthew's story is the centerpiece of the book, there are several side stories: the unrequited love of Blay and Qhuinn, a flashback of past events with Darius and Tohr, Payne's burning desire to leave the Far Side and an odd story of paranormal investigators which sets up a future book in an interesting way. I could make this a mile-long review, but I don't want to reveal any spoilers and ruin the book for anyone.

If you have never read this series--what are you waiting for??--you must read the books in order, beginning with book one, Dark Lover. There are so many characters, events and relationships that you will be lost if you don't start at the beginning. But, oh, what adventures you have in store for you! J.R. Ward is a master storyteller and the Black Dagger Brotherhood series is in a class by itself. And, yes, it's highly addictive. Don't say I didn't warn you! *g*