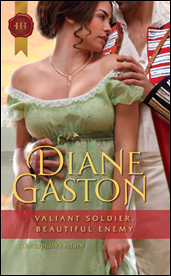 Valiant Soldier, Beautiful Enemy is the conclusion to Diane Gaston’s Three Soldiers Series, following Gallant Officer, Forbidden Lady and Chivalrous Captain, Rebel Mistress. Those who read the first two books will be familiar with Captain Gabriel Deane who came to the aid of Emmaline Mableau, a French woman who was nearly raped after her husband had been killed and her young son threatened during the barbarity that followed the Battle of Badajoz in 1812.

The beautiful widow made a lasting impression on Gabriel, and when the two meet again in Brussels three years later, they become lovers. Gabe, who has spent the greater part of his life as a soldier, begins to dream of leaving the military and building a life with Emmaline. But Emmaline’s son, whose bitter hatred of the British has grown in intensity in the years since he saw his father killed, stands between them. Even Gabe’s rescue of young Claude after Waterloo is not enough to give Gabe and Emmaline a happy ending.

Two years later Emmaline appears in London to plead for Gabe’s help in preventing her son from killing the officer he holds responsible for his father’s murder. Gabe once again commits to saving the son who is the person Emmaline loves most, the one she chose over a life with Gabe.

Gabe is a wonderful hero. It’s refreshing to read about a hero whose blood is not blue. He is a merchant’s son with no claim to the title of gentleman, but he is gentil in the Chaucerian sense—generous, chivalrous and brave, a man with a sense of honor that runs deep. Inarticulate when it comes to expressing his feelings, his actions prove his love over and over again.

I am less enthusiastic about Emmaline. I can appreciate her devotion to her son, and when she rejects Gabe because of her son, I was sympathetic. Claude was still quite young. He had been traumatized by seeing his father die and by war. Her guilt that she allowed her husband to pressure her into accompanying him to Spain and bringing their son adds to her love and sense of responsibility. But her willingness to view Gabe, after all he has done for her and for her son, through the distorted lens of her memories of her domineering husband was for me inexcusable.

There was so much in this book that merits praise. In addition to creating an unforgettable hero, Gaston does an excellent job of showing the reader Claude’s anger and confusion and need to hold someone responsible for the horrors that propelled him too soon into manhood. Some of my favorite scenes were those that showed him as the young man he would have been in different circumstances, one with a passion for horses, falling in love with a beautiful young woman. I believe Gaston has further plans for Claude. I hope so.

I was also pleased with Gaston’s handling of the villain. Since I’m avoiding spoilers, I’ll just say I prefer the reaping of harvests sewn to the execution of revenge. The integration of characters from the earlier books into the story was another plus for me. Blame the missing star on Emmaline.