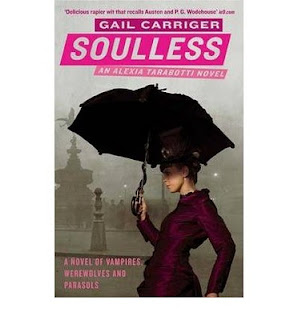 There are many things for which I'm thankful (including the fact that I was lucky enough to link up with the lovely gals who run the Romance Dish).

One is friends who drag me kicking and screaming to read books that just don't sound like my cup of tea (cups of tea feature strongly in the story I'm reviewing today!).

Bek, one of my chums from the Australian Romance Reading Association (why not join? Great group!), recently lent me a stack of her favorite reads, including SOULLESS by Gail Carriger.

Wow, I can see why this book got so much buzz when it came out. It's wonderful!

Firstly, and most importantly, this book is great FUN!

I can't remember the last time I got such sheer enjoyment from a romance. It's clever, it's witty, it's sharp, it's perceptive, it's quirky - and it's actually pretty sexy as well. The dialogue is prickly and sparky and zings with sexual tension. The heroine is gutsy and smart. The hero is hirsute, handsome and heroic. The tone is really individual - humorous high Victorian style if that makes sense. Wins all round.

As you can probably gather, I'm a convert!

The story is set in a Steampunk Victorian England with Almack's, corsets, dirigibles (which play a similar part to balloons in Regency romances) and steam technology powering all sorts of useful devices. Vampires and werewolves have come out of the closet (some literally) to play their role in society although elements of the human world still look askance at the Supernaturals. This world is so completely imagined and so beautifully portrayed, you just go with the flow. This book is a mind-boggling feat of the imagination.

Our heroine Alexia Tarrabotti is a confirmed spinster at 26. She's laboring under several disadvantages - a very silly family; a deceased Italian father who has passed on his Roman nose and his swarthy complexion; a stubborn, combative nature; and intelligence unacceptable in a marriageable female of this era. She is also that rarest of creatures, a Preternatural who can neutralize a Supernatural's powers. Vampires and werewolves become merely human while she touches them. The title 'soulless' refers to this gift of Alexia's.

In spite of all these strikes against her, our hero, the Alpha werewolf of the Woolsey Castle Pack, can't get her out of his mind. By the way, you see why I referred to the hero as 'hirsute'! Lord Maccon is one of the real treasures of this story. A gruff, cranky, shaggy Scottish earl who breaks into brogue when he's on an emotional edge - which is where Alexia tends to put him. Sigh.

When crisis hits this society, Maccon and Alexia are thrown together to solve the mystery. Vampires who should be there are disappearing and new vampires unexpectedly turn up. Only Alexia's mysterious powers can rescue the fragile peace established between humans and Supernaturals.

The story reminds me in some ways (if you discount the paranormal elements) of the wonderful romance between determined, strong-minded spinster Amelia Peabody and shaggy, awkward, but intriguing archaeologist Emerson in CROCODILE ON THE SANDBANK by Elizabeth Peters. There's that same meeting of minds, that same reluctance to admit love's hit both of them like a brick, that same reluctant sexual awareness in people who have never previously considered themselves sexual beings. It's a dynamic I love.

I could go on and on about the glories of this book. It's peopled with intriguing secondary characters. There's the Oscar Wilde-ish Vampire Lord Akeldama who gets some of the best lines. His picturesque sidekick Biffy (Biffy the Vampire Player?). There's Maccon's unfailingly capable beta werewolf Professor Lyall. And I seriously want to hire Alexia's butler Floote. Gail Carriger has created such a rich world in the Parasol Protectorate. I can't wait to explore further!

So have you read SOULLESS? Are you a Steampunk devotee? When was the last time you strayed outside the tried and true in your reading and had your socks knocked off?
Posted by Anna Campbell at 12:02 AM