Guest Review - - What a Duke Wants 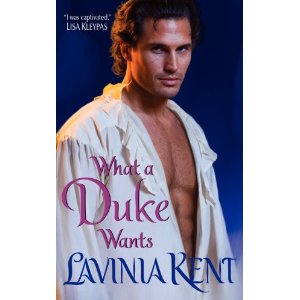 Mark Smythe, who has recently and unexpectedly become the Duke of Strattington, is making his way to London for the coronation of George IV, stopping at inns along the way. Plagued by sleeplessness, he wanders into the stable where he overhears a husky-voiced female engaged in an interesting conversation with an unseen party. He’s disappointed to discover the woman is a nursery maid who has been commanded to take her charge outside because the baby’s crying is disturbing the duke, but caught by her beauty and by the comfort of spending time with someone who knows him only as Mark Smythe, he remains to talk with her.

Isabella Smith is tired, tired of walking a restless infant, tired of fear, and tired of running. Mark Smythe makes her feel safe. She senses that he is more than the simple man he seems, but as they meet at every opportunity and conversation turns to kisses, she begins to dream of a future with him far away from the danger that pursues her.

The duke is as attracted to Isabella as she is to him, but he knows marriage between a nursery maid and a duke is impossible. He sees her not as a wife but as a mistress. A scandal erupts when the two are found together, leading to Isabella’s discovery that Mr. Smythe is Strattington. Isabella is dismissed without a reference, and those who are hunting her are still in pursuit. Desperation and desire combine to lead her in making a choice with which she cannot be happy.

A chance meeting with an old friend offers a means of escape, only to bring her face-to-face with those she most wants to avoid. But Isabella chooses to surrender her secrets, to stop running, and to reclaim the name and identity she left behind three years earlier. Mark, too, makes choices. He chooses to accept his identity as Strattington and to exercise his power as a duke to make his dreams and Isabella’s come true.

What a Duke Wants is a thematically rich novel with interesting characters and sustained suspense. Watching Isabella and Mark discover significant things about one another even as they protected their secrets was a joy. I found Isabella a particularly sympathetic character. Her reasons for running away are credible, and surviving on her own given her youth and inexperience is a testament to her strength. I did have some problems with Mark. His unease with his title and his feeling that who he is as an individual has been overwhelmed by the power and responsibilities of the dukedom ring true, but I couldn’t believe that he tolerated the behavior of his valet, and I would have liked more insight into his shift about Isabella’s role in his life. I also found some scene changes abrupt and confusing.

My greatest disappointment was that Isabella’s reunion with her family was given short shrift. Her reunion with her friend gets more attention. Readers new to Kent’s books may not be bothered by this minimalist approach, but those who have read the stories of the other Masters siblings, Violet (A Talent for Sin) and Jon (Bound by Temptation) may share my disappointment. Nevertheless, those in the latter category should not miss this book. It resolves the mystery of Isabella Masters’s disappearance, and it includes some secondary characters that I hope to see again in their own stories.