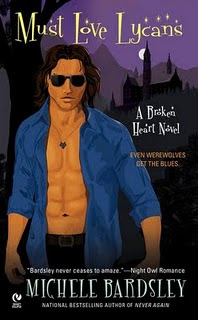 Since the moment he showed up---gloriously naked---I've been having a hard time keeping my relationship with the clinic's newest amnesiac patient strictly professional. Damian might not remember his past, but sweet mamma jamma, he sure knows how to push all my buttons.

Even with my empathic abilities, I'm not sure I can get past Damian's anger to find the cause of his delusions. After all, falling for a patient is bad enough, but falling for a patient who thinks he's a werewolf is a whole other kind of crazy. Especially when said patient decides to mark me as his. Now I'm feeling a little bit funny, and not just because Damian sets my hormones raging....


Kelsey Morningstone is a psychotherapist in charge of a mental institution (and also an empath) and her latest patient is a tall, dark and sexy---and very naked---man with amnesia. She can deal with all of that (although the naked part is a bit unusual, but very easy on the eyes), this patient seems to believe that he's a werewolf. Ok, definitely weird, but it is a mental institution. Still, Kelsey is drawn to him, but the last thing she needs is to even think about getting involved with a patient. After almost being killed by a previous patient of hers, getting lambasted by her own famous psychotherapist mother on national television, more drama is something she so does not need. But that's exactly what she gets when Damian bites her, marking her as his "mate" and they find themselves escaping from the facility and being transported to Broken Heart, a town filled with vampires, lycans, faeries and the like. Kelsey was beginning to feel a bit like Dorothy ending up in Oz.

Damian can't remember anything except his name when he wakes up in a padded cell. But when he sees Kelsey looking at him through the window in the door, he thinks mine---something about her calls to him.


"And when you were lost, did you come across something that reminded you of home? Something that comforted you so much that you could fight off the panic, the fear?"

I could answer yes to those questions, too. Instead, I asked, "Are you afraid, Damian?"

His brows dipped down and his eyes turned icy. "No." He leaned down and sniffed my wrist. Then, much to my shock, his tongue flicked against my pulse. "That's how you smell to me, Kelsey," he said in an aching voice. "Like I have come home."


Indeed, Damian marks Kelsey as his own, even before he recovers his memory. When he does remember who he is even more determined to protect her from the people who captured him, for they are after him again, and they will stop and nothing to see him---crown prince of the lycans---destroyed. And they will have no qualms of harming the woman he loves in the process. Can a lycan and a human empath find happiness in the midst of paranormal pandemonium?

Michele Bardsley's Broken Heart series has been one of my favorites since I read the first book. Laugh-out-loud funny and filled with action and plenty of sensual heat, Must Love Lycans is a worthy addition to the series and it will be residing on my keeper shelf with the rest of the Broken Heart crew.