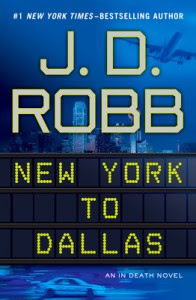 J.D. Robb captured my attention---as thoroughly as Eve Dallas catches criminals--- back in 1995 with Naked In Death, the first book in her In Death series. Sixteen years later, I am still captivated, and New York to Dallas, book 33, had me turning the pages as fast as my eyes and hands would allow. This time Eve must confront her past before it destroys her present and future.

Isaac McQueen is a violent pedophile who Eve was responsible for putting behind bars when she was just a rookie cop fresh out of the Academy. After twelve years in Rikers, McQueen has escaped and is determined to make Eve pay for sending him to prison. He begins by breaking in to his old apartment and tormenting the young couple who lives there. McQueen ties up and rapes the woman and beats up the young man then sending him to Eve telling her to come to the apartment. When Eve and her team reach the apartment, McQueen is gone, leaving behind the sobbing young woman who now has a tattoo of a blood red heart with the number 27 inside just over her left breast---McQueen's calling card, labeling her the twenty-seventh victim of his. He also tells the young woman to give Eve a message:


It's not long before Eve receives another message from McQueen; He's in Dallas, and he's taken a hostage, Melinda Jones, a twin and one of the his last victims. One of the girls that Eve saved when she arrested McQueen. Melinda is now a rate and trauma counselor attached to the Dallas police department, where he twin sister Bree is a detective. It's time for Eve to head to Dallas, the city that gave her her name, the place of so many traumatic memories of the abuse she suffered as a child at the hands of her father. While those memories still haunt her, Eve must face her own demons if she is to stop McQueen, once again, before he becomes the face in another innocent child's nightmare.

The first of this series not to have "In Death" in the title, New York to Dallas is not your typical "whodunit" since the reader knows the criminal's identity up front. And while McQueen is the type of criminal that makes the hair stand up on the back of your neck, it is Eve's journey to hell and back that makes this book a page turner with a capital 'P'. The horrors of Eve's childhood shaped her and made her the cop and woman she is today, just as the heinous childhood that her husband Roarke had made him the man is. And what a man! It's no secret that Roarke is one of my favorite heroes of all time. He's gorgeous and rich as sin, and those are pluses, but it is unwavering love for Eve that makes him practically perfect in my eyes. Her pain is his, and watching him stand by her, giving her the strength and support she needs to overcome the nightmares from her past, just ripped my heart to pieces....and then put it back together.


She heard him murmur to her, a mix of English and Irish that so lifted her heart. The words, the sound of his voice, moved her beyond passion, beyond need and held her in the open arms of love.

She'd hurt him, more, so much more that the ugly scratches. She'd seen his face, the shattered look in his eyes when she'd come back to herself. He suffered, she knew, when she went to that place. Those wounds needed tending, too. Helping him heal, feeling him take what she could give, closed her own wounds again.


Hands down, this is, in my opinion, one of the best series ever. The futuristic setting, incredible action, and phenomenal cast of secondary characters are icing on the cake, but the constantly evolving relationship between Eve and Roarke is the cherry on the top. The In Death series is not to be missed! Here's hoping Ms. Robb keeps giving us more Eve and Roarke for a long time to come.