The book that started it all . . .
By Sarah MacLean 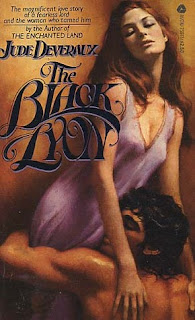 I didn’t know it then, but the day I found a copy of Jude Deveraux’s The Black Lyon tucked beneath my older sister’s bed, dog-eared and well-loved, was a red-letter day.

It was the late 80s. I was young. Ten, maybe eleven—old enough to know there was something decadent and scandalous about that book, but not old enough to entirely understand why. There had been books before that—skinny, pastel-colored Loveswepts starring cowboys and ladies in blouses and pantsuits with big hair—but after The Black Lyon, there was no going back. I was hooked. Forever.

I can still see that book, a gorgeous, red-haired Lyonene in her pink negligee, and her dark Ranulf de Warbrooke, the eponymous Black Lyon, eyes closed, massive arms clasped around her . . . worshiping her. The book was touted as “the magnificent love story of a fearless lord and the woman who tamed him,” and magnificent it was. Ranulf is dark and tortured, an unparalleled warrior feared by all—all except our intrepid heroine, seventeen and scrappy . . . and stunning.

The two fall in love. They fall hard. They fall fast. And by the end of the first quarter of the book, we’re utterly convinced that they’re perfect together. Who cares about the age difference? Or about his hardness? Or her fiery temper? They’re obviously in love . . . and love conquers all.

Except it doesn’t. And that’s where Deveraux makes magic.

Love turns dark in the hands of a wounded, jealous hero burned by a previous marriage and a young, impetuous heroine. There are misunderstandings compounded by distance, mistrust that blossoms without forthright communication, and—ultimately—fear of loss that is almost insurmountable.

Set against the backdrop of Medieval England, with Ranulf at war and Lyonene unable to ignore the vicious whispers of those conspiring against her even as she fights desperately to win back her hero’s love, this book is every inch an epic love story. It’s big and bold and classic—Deveraux’s second romance, written in 1980, when it was ok for heroes to be unrepentant, locked-down Alphas and for heroines to do whatever it took to win those utterly masculine men, and for stories to have the perfect touch of the outrageous.

But here’s the thing. For ten-year-old, fifteen-year-old, thirty-two-year-old me, The Black Lyon wasn’t just a page turning book. It wasn’t just scandalous and dangerous and something I’d definitely get in trouble for reading. It also taught me that great romance is about perseverance. And compromise. And trust. It’s about two people working through enough baggage to fill JFK Airport for a day or two, to reach the common, deceptively simple goal of love.

And it’s about the unwavering understanding that love takes work, but it’s absolutely worth it. 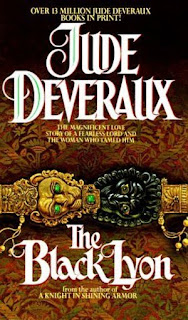 I think about the day I discovered The Black Lyon, and I wonder if it was the moment . . . some cosmic thing . . . I wonder if I’d been in my brother’s room instead, discovering The Hitchhiker’s Guide to the Galaxy, would I have been a sci-fi reader instead? Or if I’d thumbed my way through one of my father’s ubiquitous Ludlum’s, would I have become mystery obsessed—dreaming of ways to catch the killer?

That old, dog-eared copy has long since fallen apart, after too many readings and too many shovings into the hands of friends and insistings that “You must read this. Now!” Sometime during college I bought the newer version . . . the beautiful brown cover with the lion belt that plays such a gorgeous role in the plot of the book, and I am no longer embarrassed to admit that I have stroked that textured cover and sighed more times than I can count after rereading this book . . . the one that started me down my path of romance obsession. 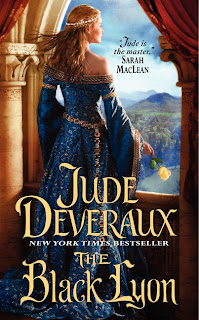 And now, I’m so very proud to have a chance to recommend this magnificent book to a new generation of romance readers. Avon has re-released the story of Lyonene and Ranulf this month, with a gorgeous new cover that absolutely does the book justice. I still pinch myself when I look at that cover and see my name there. The eleven year old in me can’t believe it (and yes . . . my sister is totally jealous).

A confession: When the team at Avon Books asked me to give them a quote for this new edition of The Black Lyon, I lost my words. Seriously. What do you say? What do you say about a book that has been with you for so long? About the book you’ve read dozens of times? The book that has been your go-to book when you were sad, or lonely, or heartbroken . . . the one that has lifted your spirits and made you sigh and laugh . . .

What do you say about the woman who made you want to write?

You tell the truth.

Jude is the master.


What book brought you to romance?  Have you read Jude Deveraux?  Which of her books is your favorite?  Why?


Sarah is giving away a copy of THE BLACK LYON to two randomly chosen people leaving comments on today's blog. (U.S. addresses only)  Thank you, Sarah!

Sarah MacLean is a New York Times and USA Today bestselling author of historical romance.  Learn more about Sarah and her books at her website, on Facebook and Twitter.