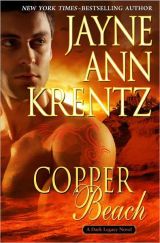 This is the first book in Jayne Ann Krentz’s Dark Legacy series, but it reads like a spinoff from the Arcane books. The setting is the San Juan Islands, the danger is related to mysterious crystals that in the wrong hands can wreak enormous destruction, the body count mounts, and the romance has sizzle and psychic connections. I consider it a measure of Krentz’s skill that she can hook a reader like me, one leery of romantic suspense and paranormal elements, into enjoying this book and anticipating the next in the series.

Abby Radwell is a rare-book expert. Her specialty is decoding books that are encrypted and can be unlocked only by those with psychic powers as rare as the books. When an armed intruder breaks into the home of one of Abby’s clients, Abby is able to use her special talents to render him unconscious. Only Abby and her eminently trustworthy client are supposed to know what really happened, but someone else knows. And that someone is blackmailing Abby, threatening an exposure of who Abby is and what her gifts are, a revelation that would damage her family and her livelihood. Abby’s long-time mentor, Thaddeus Webber, sends her to Sam Coppersmith for help.

Sam’s family is the wealthy and powerful Coppersmith family who founded an empire on the mining of rare earths. Sam, who works as a consultant in the mysterious family business and lives in seclusion in Copper Beach, the family mansion on Legacy Island, has been given the task of locating a coded lab notebook that contains information about crystals with powerful paranormal properties. Sam’s father has thought for forty years that the notebook was destroyed in the explosion in which its owner perished, but a warning from an old friend assures him that the notebook is still in existence.

Abby arrives on the island thinking Sam is a private investigator whom she expects to hire to find her blackmailer, but she discovers Sam is far more, professionally and personally. The two strike a bargain. Abby describes it thusly: “You find my blackmailer and make him go away. In exchange, I will find the lab notebook for you.”

As Abby and Sam work to achieve their goals, it becomes clear that more than one person is after the notebook. Thaddeus Webber and another bookdealer die in suspicious circumstances. Lander Knox, the son of Elias Coppersmith’s former partner is definitely in pursuit,  but Gideon Barrett, the son of the Coppersmith’s strongest business competition, and the Stricklands, Abby’s wealthy stepfamily, are also involved. Abby and Sam continue their search with danger all around them, but the attraction between them may prove the greatest danger of all.

Sam and Abby are likeable characters, and most readers will find it easy to root for them to complete their mission and begin their HEA. The mystery is not much of a mystery, but few of  Krentz’s regular readers are reading the book with the expectation that it will be. Copper Beach has the compelling characters, the psychic paranormal elements, and the solid writing that JAK’s fans consistently have found in her books. The book also features some intriguing secondary characters, including some that will set readers dreaming about subsequent books. I expect Sam’s brother and sister will get their own books, and I’m hoping to see more of the fascinating Gideon Barrett. But my favorite secondary character is Abby’s dog Newton, “a condo-sized version of a junkyard dog.”

If you are a JAK fan, you won’t want to miss this book. I don’t think it quite measures up to Running Hot, the best of the Arcane series, but it’s an entertaining read nonetheless. If, like me, you prefer your paranormals without other species, I recommend Copper Beach.