Review -- A Rogue by Any Other Name

A Rogue by Any Other Name
Rules of Scoundrels--Book 1
By Sarah MacLean
Publisher: Avon
Release Date: February 28, 2012 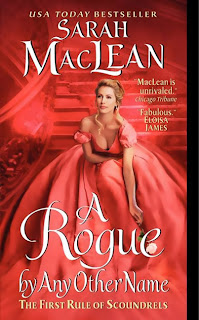 I have been looking forward to this story since I closed the last page of Sarah MacLean’s previous book. Those of you who have read it know why. We have longed for poor Penelope’s book. Well, let me say that she is poor Penelope no more. She has certainly come into her own at the talented hands and creative mind of Ms. MacLean.

Eight years ago, Lady Penelope Marbury suffered a massive scandal when her fiancé, the Duke of Leighton, broke off their engagement and married another. Penelope held no ill will toward the duke and his love match. In fact, she wanted that, too, and has used their love as an example of what she hoped and continues to hope to have one day. Though, the prospects are slim now that she is twenty-eight. When her childhood friend, Tommy, proposes, Penelope can’t give him an answer right away because she has never felt...that way toward him and feels he’s offering out of pity. Later, her father tells her he has added Falconwell, the neighboring estate, to her dowry and has spread it around London in the hopes that it will finally get his oldest daughter married off. The sprawling estate once belonged to her other childhood friend Michael, Marquess of Bourne. When Penelope sees Michael again after so many years, he is a completely different man from the boy she knew and she longs to know what happened to him.

Michael Lawler, Marquess of Bourne lost everything he held dear with the flick of one card nine years before. Since that fateful night, he has plotted revenge against the man who at one time took care of Bourne after his parents’ deaths only to create the opportunity to take it all away. In the meantime, Bourne has risen up and more than earned back the money he lost by becoming a partner in one of London’s most famous gaming hells, but even that can’t give him back his beloved Falconwell. To do that, he must marry Lady Penelope...and he intends to accomplish that by any means possible. But if he thinks she’s just going to hand it over with no strings attached, he is gravely mistaken. Bourne knows that nothing can come of their marriage because he has ruined everything of value he’d ever held so he tries to protect Penelope by staying away. But, of course, that is easier said than done.

I love this book! Right after I finished it, I immediately went back and reread all the parts I marked with post-it tabs. And I used many post-it tabs. *g*

Penelope is a kind, thoughtful, and selfless heroine that I could see myself being friends with. My heart broke for her when she was jilted at the end of Eleven Scandals. She feels like that scandal caused her twin sisters to “settle” in their marriages and she doesn’t want the same for her youngest sisters...or for herself. She truly fears rejection.

He stared at her then, for long moments, until she couldn’t bear watching him anymore for the fear that he might reject her. For it was rejection that she was most used to when it came to his sex. Rejection and refusal and disinterest. And she didn’t think she could bear those things now. From him. Tonight.

Dealing with the cold and cynical Michael gives Penelope the courage she needs to get what she wants. I admire her for not giving up on him no matter how much of a jerk he is. And yes, he is a jerk at times, but it absolutely fits his bad boy persona. I love bad boys and Bourne is one of the best. He isn’t a “bad boy with a heart of gold”, but rather a bad boy who buried his heart and never had need of it until Penelope comes back into his life. She helps him find it again. She helps him use it again. Plus, it’s hard to resist a man who says things like: “I’m going to corrupt you.” and “You make my mouth water.”, or this exchange between the two:

She exhaled audibly, and he turned his head toward her, giving her a view of one perfectly curled ear.

He rolled to his back again, jostling the blanket and baring one of her arms to the cold air in the room. When he replied, it was to the ceiling. “I know enough about women to know that sighs are never simply sighs. They indicate one of two things. That particular sigh represents feminine displeasure.”

“I’m not surprised that you recognize the sound.” Penelope could not resist. “What does the other indicate?”

He pinned her with his beautiful hazel gaze. “Feminine pleasure.”

Heat flared on her cheeks. She supposed he would easily recognize that, too. “Oh.”

This is just one of my favorite parts. I also simply adored the letters between Penelope and Michael scattered throughout the story. Honestly, I could go on and on, but will allow you to read it and choose your own favorite parts.

I am totally invested in this series and am dying to learn more about Bourne’s partners...especially after reading the epilogue. All I can say is YES! A Rogue by Any Other Name is a must-read for fans of historical romance. It made me smile, laugh, sigh, and cry. Sarah MacLean is a gifted writer and if you haven’t read her books yet, you are really missing out. I highly recommend them all!

Email ThisBlogThis!Share to TwitterShare to FacebookShare to Pinterest
Labels: 5 Star Review, A Rogue by Any Other Name, Andrea, Historical, Sarah MacLean