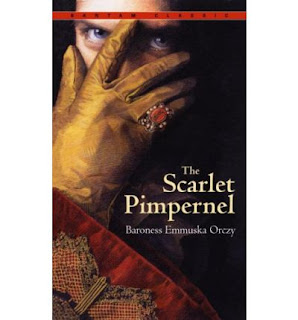 I must admit to a huge fondness for the Scarlet Pimpernel character. Sir Percy Blakeney for president, as far as I'm concerned. Sink me! There's something breathtakingly appealing about a man who is willing to sacrifice everything, including the love of the wife he adores, to save innocents from death and torture. He's clever and he's witty and he's suffering (because of said wife). Who can resist him?

Baroness Emmuska Orczy penned this swashbuckler in 1905 and it's been a hit ever since. It's a rare writer who can create a fictional character who becomes part of the culture. You really have to capture people's imaginations for one of your creations to achieve such immortality.

Actually the weird thing about doing this review is that right now I'm writing a vaguely Pimpernellish hero. Secret identity? Tick. Snappy dresser? Tick. Sharp and clever tongue (no comments from the peanut gallery)? Tick. Self-sacrificing heroism? Well, maybe he has to work on that, but he gets the idea by the end of the story, thank goodness. And when he gets the idea, he gets the girl. This particular hero of mine has been germinating in my mind for months but it never occurred to me until a good friend, Denise Rossetti, recently suggested THE SCARLET PIMPERNEL as a future review for the Romance Dish that it was time to re-visit the original model.

Ha! Sometimes things are more obvious than the nose on your face and you still don't see them!

I read this book many years ago (if I tell you how many, I'll have to kill you). I remember getting it out of the school library in grade eight after I saw the 1934 British film late one night. That movie stands up surprisingly well for something that old - Leslie Howard makes a very dashing Pimpernel and Raymond Massey is a great baddie. I never really warm to Merle Oberon but you don't really watch this movie for the gals. The version of THE SCARLET PIMPERNEL that I absolutely adore is the 1982 one with an incredibly handsome Anthony Andrews who conveys a tormented heart in a most picturesque fashion. Again, I'm not crazy about the Marguerite in this version either. Jane Seymour is an icy beauty, a bit like Merle Oberon. But I dare your heart not to flutter when AA stares longingly at the wife he thinks is a French spy. Sigh.

So when I picked up the book for this review, I think it's fair to say that my principal recollection of the story was via the screen. So my re-read offered a couple of surprises. The first is that the book is almost completely told from Marguerite's point of view.

Just a quick precis of the plot for anyone who hasn't read/seen it. During the French Revolution's Reign of Terror, a mysterious Englishman called the Scarlet Pimpernel and his band of brave lieutenants spirit large numbers of aristocrats out of France to safety in England. Nobody knows who the Pimpernel is but the French government would dearly like to know so they can catch him and send him to the guillotine. He's a master of disguise and fiendishly clever and he's making fools of the French authorities. A French agent, Chauvelin (boo, hiss), is sent to London to ferret out the Pimpernel's identity. Chauvelin blackmails beautiful Frenchwoman and former actress for the Comedie Francaise, Marguerite Blakeney, to discover the Pimpernel's identity. If she doesn't cooperate, her brother will go to the guillotine.

Marguerite marries foppish Sir Percy Blakeney after a whirlwind courtship. On the day of their wedding, Percy learns that Marguerite betrayed an aristocratic family to their deaths and things have been pretty sour in the marital home since then. Marguerite has come to despise her husband, who minces around the court wearing fancy clothes and making bad witticisms (except they're kinda cute, but then I like a good/groanish pun). Secretly, she's more than half in love with the dashing SP but agrees to unmask him when Chauvelin threatens her brother's life. Much intrigue and derring-do follow until Marguerite discovers that Percy is the Pimpernel and Percy discovers that the woman he adores is worthy of his love after all. All this with foiling the bad guy and rescuing another bunch of aristos? Bonus!

Cheers all round! Huzzah!

Anyway, getting back to the book. I was surprised at how little Percy is present in the story compared to the dominant role he takes in the movie versions. Much of the book, in between the intrigue, details Marguerite's unhappiness and disappointment in her marriage. Having said that, the story absolutely gallops along. If you think something written in 1905 is going to be slow and staid and stuffy, think again.

One disappointment for me - and this probably has something to do with literary fashion in 1905 - is that the Baroness gets shy at the end when Marguerite and Percy have finally discovered each other and they're in love and you know, mush, mush, mush. Here, there isn't much mush and I WANT MY MUSH! My fingers itched to take up my pen and write the scene where they each declare their love and how silly they've been to doubt one another. You know, the last chapter of your standard romance novel. But still, I suppose you can't have everything and there's plenty to enjoy in THE SCARLET PIMPERNEL.

This book definitely qualifies as a romance classic. It's interesting to re-visit the books that established romance as such a popular genre and the character archetypes who still appear in modern stories.
So have you read THE SCARLET PIMPERNEL? Have you seen any of the screen versions? Do you have a favorite? Why do you think Percy Blakeney/SP has enjoyed such enduring popularity?
Posted by Anna Campbell at 12:02 AM