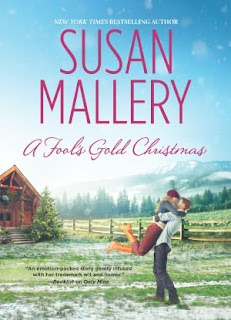 Evangeline Stryker is the youngest member of the Stryker family and May Stryker’s only daughter. Since her birth, Evie has been a living reminder to May of an episode she would prefer to forget. A warm and loving mother to her three sons, May never bonded with her daughter, and Evie grew up feeling like a misfit in the close family. At seventeen, she left home to train as a dancer at Julliard and has had little contact with her family in the eight years since then.  When a football player plowed into her while she was doing her job as a cheerleader for the Los Angeles Stallions, she was left with a broken leg, torn tendons, and no chance that she’d ever dance professionally again. She was also left at the mercy of her brothers who brought her to Fool’s Gold. She’s avoiding her mother as much as possible, feeling uneasy with the presence of three brothers, one sister-in-law, and two sisters-in-law-to-be, and marking time until she can leave town.  In the meantime, the aging dance teacher who hired her has run away with her gentleman friend and left Evie in charge of Fool’s Gold’s annual performance of The Dance of the Winter King with roles for all sixty of her dance students.

Lawyer Dante Jefferson is also in Fool’s Gold reluctantly. He liked his life in San Francisco, but when his partner, Rafe Stryker, the oldest and richest of the Stryker brothers, falls in love with Heidi the goat girl (Summer Days) and relocates to his hometown, Dante has little choice but to follow. On the job, Dante is a cold-hearted bastard who always wins; in his personal life he appears to be a light-hearted, sophisticated charmer skilled in flirtatious banter. Beneath his polished surface is a wounded hero. When a teenage Dante dated a gang leader’s girlfriend, Dante’s mother, whom he adored, was shot and killed in retaliation. Since then, Dante has kept his relationships fun and casual and his heart as guarded as a city under siege.

When Dante storms upstairs to put the fear of lawyers into the dance instructor whose students are making it impossible for him to conduct business sanely and quietly, he’s not prepared for the sexy blonde in a clinging leotard and tights. But when he recognizes Evie Stryker, he knows it can’t matter how sexy she is. She’s the baby sister of his friend and business partner, and it’s clear she’s not the cool, detached type who shares his no-commitment rules.

Evie may find Dante charming, good-looking, and intelligent, but he’s her brother’s business partner, clearly a player, and he will bring complications she doesn’t need into her already too complicated life. But the two have much in common. They both see Fool’s Gold as strictly a temporary place, they both are wary of trusting anyone, and they both are uncomfortable with Christmas and its family associations.  Plus they genuinely like each other, enjoy spending time together, and develop a friendship. Adding a benefits clause to their friendship seems only logical, especially since the chemistry between them is explosive. But they forget the heart is no organ of reason, and love can invade even the most heavily guarded fortress.

This is the tenth book in Mallery’s Fool’s Gold series, and the stories are still fresh and fun. Evie and Dante with their hidden vulnerabilities are both endearing characters. They are wonderful together. I especially enjoyed the conversations filled with the mix of wit and affection and revelation that made me believe these two people were not only falling in love but building a real friendship. I also loved watching Evie fall in love with Fool’s Gold, her students, and her place in a family. Her estrangement from May was resolved rather too simplistically for my taste, but this is romance, not women’s fiction, so perhaps a simplistic resolution was to be expected.

As always, I loved seeing characters from the earlier books, and the charm of the town itself is as dependable as the seasons. I’m a fan of Fool’s Gold and a fan of Christmas romances, and I found A Fool’s Gold Christmas delightful on both counts. If you’re looking for a Christmas read with a lot of warmth, a generous dash of sizzle, and a happy ending that has several strings in its bow, I definitely recommend this one. I’m hoping for several return visits to Fool’s Gold in 2013.