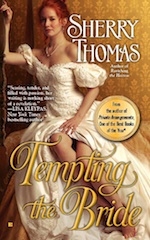 Helena Fitzhugh marches to her own drum. She is university educated in a time when few women are. She owns a publishing company purchased with her own money and operated with her own energies, even rarer choices for a young woman of her class. She is also in love with a married man, Andrew Martin. They fell in love when Helena was twenty-two, and neither Andrew’s agreeing to his mother’s demands that he marry the woman she chose for him nor the marriage itself has shaken Helena’s love for him. And her family’s watchful care and the interference of the pestilential Lord Hastings combined have not prevented her from seeing Andrew.

David Hillsborough, Viscount Hastings has been in love with Helena Fitzhugh since they were fourteen. So overwhelmed was he by Helena and the feelings that she evoked in him that he behaved foolishly, attracting her attention by annoying her with vulgarities and putdowns, in the manner of obnoxious adolescent males. The problem is he’s stuck in the pattern thirteen years later, unable to forget Helena and unwilling to take the risk of telling her how he feels. He knows how close to social ruin Helena is skating in her relationship with Andrew, and he does his best to prevent disaster for Helena’s sake and for that of her twin brother, Earl Fitzhugh, his best friend.

Hastings learns that Helena and Andrew have been set up by Andrew’s wife who wants evidence that will allow her to break free of her husband. Hastings rushes to the hotel where the lovers are to meet and arrives in time for Andrew to hide and Hastings to be found with Helena when the Martin women, Andrew’s wife and domineering mother, burst into the room. Hastings announces that he and Helena have eloped, but before his fiction can become fact, Helena is critically injured in an accident as she chases after Andrew.

Hastings is a constant presence at Helena’s bedside as she lies for days in a coma from which he fears she may not awaken. When she does regain consciousness, Helena can remember nothing of the past thirteen years of her life. She recognizes Venetia, her sister, and Fitz, her twin, but she doesn’t know their spouses. And she doesn’t know Hastings, who she is told is her husband. Hastings has the opportunity to start with a clean slate. He can relate to Helena now with none of the annoying games that have characterized his relationship with her for years. She responds to him with none of the scorn that was her wont. As he reveals to her the man he truly is with all his intelligence and charm and devotion, Helena begins to view him with liking and eventually with desire. Hastings is torn between joy over the feelings growing between them and fear of the future when Helena’s memory returns.

This is the third book in Thomas’s Fitzhugh trilogy, following Beguiling the Beauty (Venetia’s book) and Ravishing the Heiress (Fitz’s book). The pattern of a Fitzhugh past the first blush of youth finding the love of her/his life with someone who has loved her/him from a young age is sustained in this book. Despite this similarity, each story is unique. In this one, Thomas takes some of the conventions and tropes I dislike in romance and weaves them into a story that I loved, regardless of my prejudices.

First, I’m not a fan of the hero and heroine who begin as word snipers constantly tearing at one another verbally. This kind of thing makes me really uncomfortable in real life, and I don’t like it any better in fiction. Helena and Hastings’s pointed exchanges are a minor thread in the first two books, so it’s been going on for quite a while. But because Thomas made me care about Hastings from the beginning by showing him as more than the man Helena sees, I wanted him to have his HEA. I wasn’t persuaded that Helena deserved him even for much of this book. But Thomas undercut my dislike of the character by having Helena think exactly what I thought of her earlier behavior: “She could hardly breathe for her searing aversion to this reckless, selfish woman. . . .”

Speaking of aversion, I have an aversion to amnesia plots. It probably dates from an addiction to soap operas in my teens. But I found Helena’s physical and emotional reactions to her amnesia believable. I don’t know if anything else would have served so well to render the self-assured Helena vulnerable. The character was much more likable after she lost her memory.

Triangles don’t have much appeal for me either, especially when they involve adultery. But Helena is so clearly the pursuer in her relationship with Andrew that it’s difficult to hold him responsible. Gentle, anxious, and so easily controlled by strong-willed women, he is such an unlikely partner for her. Nothing makes this clearer than the final scene between the two where Helena’s farewell action is to give Andrew commands involving both his marriage and his writing.

On the other hand, Hastings’s love for the willful Helena is the kind that leaves me sighing. He has no illusions about her, but he views all she does through the lens of a love that understands and accepts. When the amnesiac Helena is horrified by the knowledge of all she has risked in her determined pursuit of Andrew, Hastings comforts her: “You lost him when you loved him the most, a difficult blow that never quite softened with time.”  Helena is solaced by his kindness. “She let herself wallow in the magnificence of his compassion, the sweetness of his friendship.”  We see that generosity of spirit in Hastings’ love for Helena and just as movingly in his love for his illegitimate daughter, Bea.  He’s also an artist and a writer and a passionate lover. He’s close to the perfect hero in my opinion, and my favorite moment in the book is when Helena fully realizes what she has. The epilogue is a very pretty bow on the wonderful gift of this story.

I’ve heard that Sherry Thomas may not write any more historical romances. I hope she changes her mind, but I’m grateful for the treasures she has given readers over these past few years. I’m particularly grateful for this nearly perfect trilogy. For the third time, I highly recommend the latest book in the Fitzhugh trilogy.