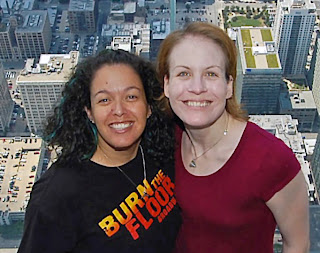 Today we welcome erotic romance author Katie Porter! Who is Katie Porter, you ask? From Katie's website: Katie Porter is the co-writing team of Lorelie Brown and Carrie Lofty, friends and critique partners of six years. Both are multi-published in several romance genres. Carrie has an MA in history, while Lorelie is a US Army veteran. Generally a high-strung masochist, Carrie loves weight training and has no fear of gross things like dissecting formaldehyde sharks. Her two girls are not appreciative. Lorelie, a laid-back sadist, would rather grin maniacally when Carrie works out. Her three boys love how she screams like a little girl around spiders. To learn more about the authors who make up Katie, like them on Facebook or follow them on Twitter: @carrielofty, @LorelieBrown, and @MsKatiePorter. Welcome, Katie!


What’s in a Name?
By Katie Porter


Consider how many names you respond to. Mommy. Sis. Grandma. Your given name and goofy names and nicknames. Names have power. They help us denote personal relationships and where we fit within society. So I wanted to look at the names in HOLD ’EM. One hero. One heroine. Easy, right? Not so much… 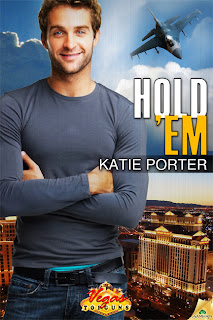 Leah: Her given name, used by her friends and by Mike when they’re just hanging out.


Mike: Shortened for of his give name, used by all his friends, family, and even Leah when she’s exasperated or sharing a joke.


“Princess”: Her fighter pilot call sign—as in Princess Leah. She hates it, which means her colleagues use it constantly. Mike gets the serious cold shoulder when he tries.


“Strap Happy”: Occasionally shortened to “Strap,” Mike’s call sign is used exclusively by his male colleagues. It has something to do with his kink, but we won’t spoil that.


Michael: No one uses his given name but Leah. It’s endearing, possessive, and she can use in plain company—a hint of sexy things to come.


Pet: Leah’s name for Mike when he becomes her own personal playground. He’s the biggest, baddest guy she’s ever known…and he gives himself to her.


Here are two brief exchanges to demonstrate how important their names are in the progression of their love affair. These moments reveal everything.


“You’re looking at me like I’m your buffet. Turns me on, Princess.”


She tweaked his nipples so hard that he flinched. “No. No ‘Princess’. Not here.”


His laugh felt good, just a small release to the pressure. “Noted.” He caught her gaze again then ducked his eyes. “It turns me on, Leah.”


“But you don’t look at me. Why not?” She smiled and licked up from his navel—all wet and ticklish and sexy as hell. “Wait, don’t tell me. Permission again?”


“Well, here’s the deal, Michael.” A shudder worked down his spine. Leah tipped her head. “What…? Michael?”


Rolling his eyes to the ceiling, he fought for calm. Fought to breathe.


“That’s it, isn’t it? You like your full name.” She grinned against his stomach then bared her teeth. At that sweet scrape, testing such sensitive skin, Mike made fists. She tugged the waistband of his jeans.


She stopped with her hand on the doorknob. Her mouth worked over so much she’d like to say. At the chapel, she’d been sure he would take her hand if she offered it. The ice in his eyes said that chance was long gone.


“Mike.” He punched the TV’s off button with one finger. “Call me Mike. Or Templeton. Or asshat. I don’t give a shit. I better not hear Michael come out of your mouth again. I can’t be held responsible for what I’d say in return.”


She shriveled up and died inside. Flat out. Nothing left. “Just…take care of yourself.”


A sarcastic twist folded his mouth and angled his eyebrows. “Oh, don’t you worry about me, Princess. I’m going to be just fine.”

So what’s in a name? In romance, names denote intimacy—the many levels of intimacy a couple can experience during the mating dance. They can be bestowed, and they can be taken away. Both indicate serious events. As for these two lovebirds, I’ll give you a hint…she calls him Michael again by the time they reach their happily ever after. Of course she does!


Up next for Katie Porter, the co-writing team of Carrie Lofty and Lorelie Brown:


Now that the first three of the RT BookReviews 4½ Star Top Pick “Vegas Top Guns” series have been released, readers can anticipate the final two installments, HARD WAY and BARE KNUCKLE, in 2013.


Where to find us:


We'd like to give away a copy of DOUBLE DOWN, INSIDE BET or HOLD ’EM (winner's choice) in any format. Just answer the question: Do you have a pet name for your significant other, one your significant other has for you, or an embarrassing name your parents STILL use after decades of adulthood?

Thanks again to The Romance Dish for featuring Katie Porter and Hold ’Em!
Posted by Andrea at 12:30 AM