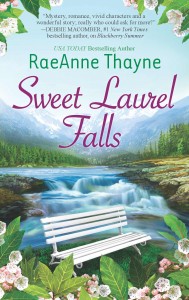 Outside, Hope’s Crossing is a winter wonderland of snow and lights; inside, Dog-Eared Books & Brew is decorated for the Christmas season. Maura McKnight-Parker has prepared the goodies and gifts for the annual Books and Bites book club Christmas party that is set to begin in her bookstore any minute now. The only thing she hasn’t prepared is her heart. It’s still locked in deep mourning and has been since spring when the unthinkable happened and her younger teenage daughter was killed in an accident. But Maura is determined to make her worried family and friends believe that healing has begun and she is rejoining the living. Her highest hope is to just maintain her act through December when the festive season is over and her daughter Sage has returned to college.

About the time the book club members begin arriving, Maura recognizes the strange man who just entered the bookstore. It takes a bit longer to realize that the woman with him is Sage. She’s still reeling over the shock of seeing Sage with the last man Maura ever expected to see her with when a brittle Sage introduces the stranger to everyone within hearing distance as Jackson Lange, her father.

Jackson Lange left Hope’s Crossing twenty years ago, a proud and angry eighteen-year-old, rejecting his father and all he stands for. Jack vowed never to return. He’s no longer a small-town boy. Now he’s a cosmopolitan architect with an international reputation, a San Francisco apartment, a short-lived marriage—and a nineteen-year-old daughter he’s known for three days who already alternately delights and terrifies him. He’s not sure of much right now, but the one thing he does know is that he intends to be part of his daughter’s life now that he’s found her.

This is the third book in Thayne’s Hope Crossing series, following Blackberry Summer and Woodrose Mountain. I enjoyed the others, but I think Sweet Laurel Falls is the best of the three.  The accident in which Maura’s daughter Layla was killed links the three stories, and I have been hoping since the first book to see Maura begin to heal. Thayne does a wonderful job of showing both Maura’s near-paralyzing grief and gradual understanding that even a life irrevocably changed must go on.

There were so many ways that Thayne could have gone for the trite and ended up with a lesser book, but she rejects the knee-jerk response every time. First, there’s the combination of Christmas and loss. Anyone who has lost someone she loves knows the pain of the first special days without him/her. I can only imagine that the first Christmas after a child’s death must be difficult beyond words. I’ve read books where characters in similar situations retreated into their grief and added to the burden other loved ones bear. I think it says a great deal about Maura that she refuses to do this.

Second, there’s the anger that Sage, Jack, and Maura all feel about the past and the secret of Sage’s birth. Sage’s anger when she reveals her father’s identity in the bookstore is almost palpable. And she has a right to be angry that her mother lied to her. Jack is angry too, angry that Maura never told him about Sage, angry at all the time he lost with his daughter that cannot be reclaimed. His anger too seems eminently justifiable. Maura is angry as well, angry that Jack followed her father’s pattern of leaving, angry that Jack’s arrival has turned upside down a world that has already been rocked on its axis. Her anger may be less logical, but it makes sense emotionally. Yet none of these characters use their anger as a weapon or a wall, or at least they do so only briefly. Sage tells her mother how angry she is, but in the next breath assures her that she loves her. Jack reminds himself when anger at Maura threatens to consume him that she was a seventeen-year-old making decisions in an impossible situation and that he left with no thought of consequences. Maura understands that Sage and Jack need to build a relationship, and she realizes that her resentments of him stems from her fear that she’s losing Sage. Through all the turmoil, these people talk to one another.

Finally, it’s a small point, but one I really liked. Maura’s marriage to Chris Parker lasted only five years, but he was a good stepfather to Sage and has continued to be involved in her life since the divorce. Sage loves him and still enjoys a good relationship with him. Since the man is the frontman in a rock band, it was especially refreshing to see him presented as a responsible and caring adult.

I haven’t even touched upon the strong sense of community that makes Hope’s Crossing a warm, wonderful—although imperfect—place. There’s a subplot with Jack’s father that adds interest, and for readers who have read the other books, there’s the satisfaction of seeing familiar characters again. Despite their appearance, I think this book can be read as a standalone. The only thing that kept this from being a five-star read for me is a complication in Sage’s life that seemed unnecessary to me.

There is sadness in this book, and it’s a sadness that will never completely disappear. But there is also redemption and joy and love in many dimensions. And, of course, there’s hope. We are in Hope’s Crossing after all.