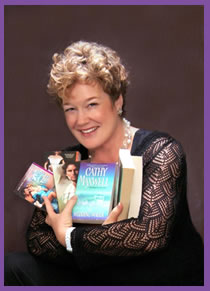 It's my pleasure to welcome Cathy Maxwell back to The Romance Dish today.  Not only is Cathy one of my favorite authors but she's also one of the nicest, most genuine, most joyful people I've ever met.  A New York Times bestselling author, Cathy has written more than twenty-five single title romances and contributed to several anthologies.  Her newest book, THE SCOTTISH WITCH (released into the wild today!)  is the second book in her new The Chattan Curse series.  THE SCOTTISH WITCH isn't the only new production in Cathy's life these days...but I'll let her tell you about that. Take it away, Cathy!

The Magic
By Cathy Maxwell

I know I should write about the release of my new book THE SCOTTISH WITCH.  After all, how perfect the opportunity?  The word “witch” is in the title; tomorrow is Halloween.  PR, PR!

However, I have something else on my mind.  As I’m writing this, my daughter and son-in-law are preparing to have their first baby.  He’s a boy and will make his appearance in the next twelve to twenty-four hours or thereabouts.  You know how babies are.  They never arrive when expected and keep us on our toes until they are out the door years from now.

I will not go schmaltzy about the circle of life and all that jazz.  Okay, maybe a little schmaltzy.  It is that sort of occasion. 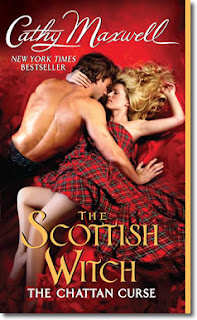 Love allows us to face the “what ifs.”  I wish there was a superhero Halloween outfit for love.  Whether pirate or nobleman, vampire, shape-shifter, police officer, soldier, or spy, love brings us all to what is truly important in life.  It can heal, it can motivate, it can inspire, it can create.  It makes us look at the very best in ourselves.  There have been times I’ve been completely humbled in the presence of love..

Love can also be scary.  It can be a grand adventure, but first you must trust the unknown.  Loving someone, making a commitment to him or her is not for the faint of heart.  Just when you think you’ve mastered love, when you believe you have it tied down, it will change.  Sometimes it evolves into something better than you could have ever imagined . . . or it can vanish.  Evaporate.  One moment you have your arms around it and in the next—poof!

Okay, back to the promo stuff—in the Chattan Curse Trilogy of which THE SCOTTISH WITCH is a part (and I strongly advise you to read LYON’S BRIDE before you take on this second book), I question how important love is to life.  How necessary is it?

My theory is that if you tell me what you love, whom you love—then I will know all that is important about you.  But what if you cut yourself off from love? What is left?

By the way, you may also want to check out some pictures of Scottish Fold cats before you read my latest.  You don’t have to, but I’m just sayin’.   (Cats and Halloween and all that.)

I’ll let you know how the baby turns out.  I know he will be adorable . . . and very well loved.

Okay, blog question—What would your life be like without love?

PS—Thirty hours later after finishing writing this blog, I can introduce you to Zavier, 20 inches long and 8lb 1oz of love.

Congratulations to Cathy and her family on the birth of Zavier.  Welcome to the world, little guy!

When a Chattan male falls in love, strike his heart with fire from above . . .

Portia Maclean believes she is beyond love and marriage. Then one moonlit night, while attempting a daring masquerade in a desperate bid to protect her family, she finds herself swept off her feet by a powerful stranger. But what will he do once he discovers she has betrayed him?

Harry Chattan is fighting for his family. For two hundred years the Chattan men have been destroyed by love . . . and now he's come to Scotland on the hunt for a witch to break the curse. Instead he finds himself bewitched by Portia. Harry has vowed to fight the demons that torture him.

But will that battle destroy her as well?