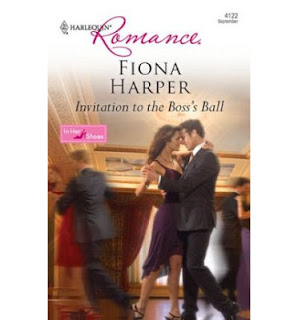 Firstly, apologies! Last month I promised that this October I was going to delve into the dark, foggy and bat-ridden world of Victoria Holt's gothics.

Unfortunately for my book reviewing plans, I've been head down finishing the second book in the Sons of Sin series and have only snatched rare reading time. Vicky and her dark, dangerous heroes will have to wait until November! I hope she's not so piqued at the delay that she sends the sinister housekeeper to shove me off the battlements!

So I'm doing another Harlequin roundup this month. I hope you don't mind. One of the lovely things about a category romance is that when time is short, you can still get your romance fix. Add to that a down day when I had a miserable head cold and I felt like some comfort reading, and voila, I've got some great Harlequin discoveries to share with you.

Two of these books are fairly recent and should be readily available. The other two are available in digital format or from online sellers.

First up was a real discovery for me - you're all probably miles ahead of me here. I'd heard really good things about Fiona Harper and I knew she'd been up for at least one RITA Award, generally a great indicator of quality. But I'd never actually read one of her books. On the day I suffered with my snuffed up nose, I had a twofer that I'd picked up at one of the Australian conferences. I read the first book which was by an author I knew and liked, then out of curiosity started the second book in the volume, INVITATION TO THE BOSS'S BALL (January 2012). Well, that was better cold medicine than a packet of aspirin! I was smiling on page one and I was beaming by the end and everything in between was enchanting.

As you've probably gathered, this is a Cinderella story. Alice is the kind of girl who tends to be one of the guys rather than a glamour puss. But when she helps a friend who's selling vintage fashion and enters the ambit of sexy tycoon Cameron Hunter, she gets a chance to play the princess, even if only for one night. But what happens after the ball is over? This one's a real charmer and I highly recommend it, even if sweet romances aren't usually your thing. It's funny, it's wise and it's touching - and the vintage fashion is great fun. 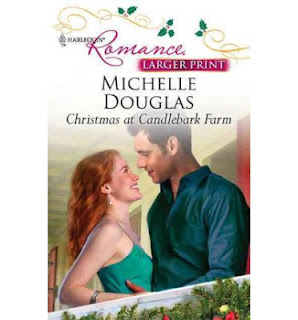 The next one was also from my cold-ridden day and it's by an Aussie author - love to recommend a local. CHRISTMAS AT CANDLEBARK FARM by Michelle Douglas is another charmer, although it deals with more difficult subject matter than INVITATION TO THE BOSS'S BALL.

Gutsy, generous Keira Keely lodges temporarily with outwardly grumpy widower Luke Hillier while she sorts out an unexpected inheritance. Keira is pregnant after IVF treatment that she sought when she discovered that medical issues could prevent her having children if she delays too long. Luke is struggling to cope with his estranged wife's death. The fallout includes hostility and blame from his in-laws and the other residents of Gunnedah, not to mention his teenage son's grief and anger.

On the surface, sunny Keira and brooding Luke share nothing but a strong and unwelcome sexual attraction. But as Christmas approaches, Candlebark Farm witnesses a miracle - joy, hope, love and reconciliation after tragedy. There's smiles in this one but tears too. Beautifully done. And the country Aussie setting is marvelous. 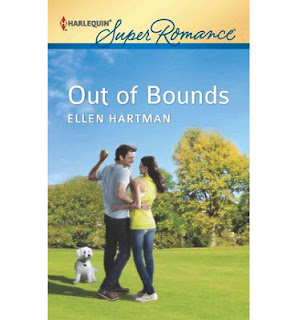 Last month, I talked about another new discovery for me, Ellen Hartman, who writes for SuperRomance. In September, OUT OF BOUNDS, the sequel to her wonderful THE LONG SHOT hit the shelves. It's got the same mixture of humor and deep emotion and heartwarming resolution that made THE LONG SHOT so memorable.

Wes Fallon, the hero's brother from the first book, has to give up his basketball career after an injury. While he's deciding what he wants to do with the rest of his life, he accepts a job with Deacon's foundation to set up a facility for disadvantaged kids in upmarket Kirkland, New York State.

When he meets strong, competitive, mouthy Posy Jones, he's instantly bowled over. But Posy has secrets, including the big, fat, nasty one that her mother has stolen a huge donation to the charity and left Posy to clean up the mess.

One of the real delights of this book (and the earlier one) is the strong heroine. Posy is the kind of woman I love to see in romance - she's difficult and ambitious and not inclined to play second fiddle to anyone. Add to that a really delicious hero and a demon dog and you've got a yummy mixture! Highly recommended. 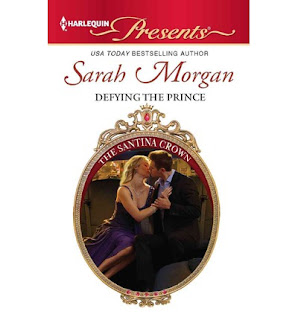 Lastly, I can't miss out on recommending a Harlequin Presents from one of my favorite authors, Sarah Morgan, who won the RITA for best category romance this year for her sublime DOUKAKIS'S APPRENTICE.

Sarah's DEFYING THE PRINCE (August 2012) is such fun. It's got a similar sparkle to Doukakis - I found myself laughing out loud several times in this book, for example when our awkward heroine is stuck for conversation at a state dinner and regales a sheikh with the information that camels have sphere-shaped haemoglobin.

Izzy Jackson is a national laughing stock since she appeared on a tacky reality TV show called Singing Star. When she makes a fool of herself at the party to celebrate her sister's engagement to the Crown Prince of Santina, autocratic Prince Matteo, second in line to the throne, whisks her away to his isolated estate where she can do no more damage.

The problem is the damage has already been done. These two are victim to a sizzling attraction that neither can deny, much as they'd like to. Matteo thinks Izzy is a self-serving airhead. She thinks he's a pompous, spoiled snob. Both of them have a lot to learn about the person under the mask. The dialogue between these two absolutely zings as Izzy provokes Matteo into becoming human and Matteo slowly turns into Izzy's strongest supporter. Lovely all round and wow, does the sexual tension blaze in this one. Grab it while it's hot!

When I had my cold, I was reaching desperately for comfort reads (and tissues), hence the double appearance of Harlequin Sweet Romances in this column. Do you have any comfort reads? Do you reach for an old favorite? A specific line? A specific genre? Let's talk about the kind of romance that gives you that nice warm feeling when the world is a bit bumpy.
Posted by Anna Campbell at 12:00 AM