Review -- The Temptation of Your Touch

The Temptation of Your Touch 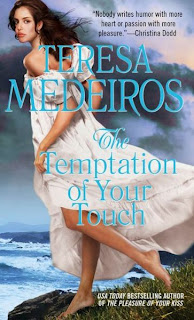 Maximilian Burke, Earl of Dravenwood, is a misunderstood man. Yes, he has done some deplorable things—namely to his younger brother—but when one knows his whole story, one can sympathize with him on some level. I’m not saying that what he did was right. I’m only saying that being left at the altar by the woman he’d loved for most of his life for his own brother (who said bride had loved for most of her life) can make a man do things he wouldn’t typically do. Things like trying to keep them apart, and fighting a duel with someone who besmirched her name. That duel was the last straw for Max’s father, the duke, so it’s suggested that Max leave for a little while until things blow over. He travels to one of their remote properties, Cadgwyck Manor, on the stormy coast in ...a place that is apparently inhabited by a beautiful ghost, the White Lady. The story of the ghost is so daunting that no one in the surrounding village will go anywhere near Cadgwyck Manor at night, as Max finds out the hard way.


Housekeeper Anne Spencer and her band of misfit servants reside at Cadgwyck Manor. They’ve gone through several masters the last few years and are dismayed to discover that yet another one is about to descend upon their quiet lives. The former masters were easily dealt with, but after meeting the earl, Anne senses that he will be anything but easy to get rid of. She and the others usually spend their days searching for the hidden treasure of the Cadgwyck family and now they must do their best to make life impossible for Lord Dravenwood. They keep the place dusty and untidy while serving him bland food that even a dog couldn’t stomach. Anne quickly learns that she has met her match with the broodingly handsome Maximilian Burke.


The earl stood well over six feet but it wasn’t his height—or even the intimidating breadth of his shoulders beneath the shoulder-capes of his great coat—that was so imposing. It was his effortless command of the room and all who were in it. Another man might have looked ridiculous standing there with hat in hand and mud-caked boots, but Dravenwood looked more inclined to bellow “Off with their heads!” while the potential victims scurried away to fetch him an axe.


His dark-lashed eyes were gray, as gray as the mist that swirled over the moors. Anne had always thought gray to be an ordinary color, but his eyes had the disconcerting habit of flashing like summer lightning when he was displeased.


The greatest threat to them was the glint of intelligence in those eyes. He was not a man who missed much, and that, more than anything, could prove to be their downfall if they weren’t careful. When she had introduced herself, his gaze had flickered over Anne, taken her measure, then dismissed her for what she was—a menial, an underling, his inferior. He didn’t find her wanting; he simply found her beneath his notice.


Which is exactly where she needed to stay.


It is no wonder that Teresa Medeiros’s books always hit the big-time lists and get starred reviews because her writing is exceptional and her stories are so compelling. The Temptation of Your Touch is the sequel to her best-selling The Pleasure of Your Kiss, which features Max’s brother, Ashton, and the woman who came between them, Clarinda. In The Temptation of Your Touch, Max is dealing with the emotion and consequences of his actions toward Ash and Clarinda and his emerging fascination with both the White Lady and his housekeeper. Anne is prim and proper and has very good reason for being so. She holds her cards close to her chest, much like her new master. Both Anne and Max have been hurt after offering their hearts to someone and are reluctant to do so again and risk more heartbreak. And yet, they soon realize that taking a chance on the other may be worth the risk.


Anne gazed into Dravenwood’s eyes, mesmerized by their crystalline clarity. It was as if he was seeing her...truly seeing her for the very first time. His regard was like the most rare and costly of gifts, giving her back something she had believed to be forever lost.


One more thing I love about this book is that Anne is described as having a “winsome gap” between her two front teeth. That endeared me to her right away as my husband and two kids have winsome gaps between their front teeth, too. J


Teresa Medeiros may only release one book a year, but she certainly makes it worth the wait. And I have to add that the cover of this book fits the story perfectly! If you enjoy tender, beautifully-written historical romance with a gothic feel and sprinkled with humor, do yourself a favor and pick up The Temptation of Your Touch. I can’t recommend it enough!

Email ThisBlogThis!Share to TwitterShare to FacebookShare to Pinterest
Labels: 5 Star Review, Andrea, Historical, Teresa Medeiros, The Temptation of Your Touch