Guest Review - - Back to You

Back to You
By Robin Kaye
Publisher: Signet
Release Date: December 31, 2012 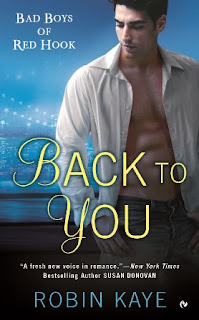 Storm Decker is coming home to Red Hook, the Brooklyn neighborhood he left behind him eleven years ago to make his mark in a larger world. He has succeeded beyond his expectations, finding his place in Auckland, where he owns his own company. Designing boats for the rich and famous, winning yacht races, and making more money than a poor kid from Brooklyn could imagine allow Storm to take pride in the life he has built. Returning to Red Hook was not part of his plan, but he owes a lot to his foster father, an ex-cop and bar owner, who took Storm in when his biological father almost killed him. Pete gave Storm a home, a family, and a space to grow his dreams. Storm will make whatever sacrifices he must to be there for Pete while he’s recovering from a quadruple bypass. As long as his Pop needs him, he’ll be in Red Hook.

Breanna Collins owes a lot to Pete as well. When her own police officer father was killed on duty, Pete, her dad’s partner and life-long friend, stepped in, becoming a substitute father for Bree. He gave her a place of safety and sanity and a chance to lead a normal life when her mother’s obsessive drive to protect her almost smothered Bree. She and Storm grew up together, but she never thought of Storm as a brother. She was seventeen when they almost became lovers, but Storm ran away, leaving her devastated. In the eleven years that Storm has been gone, Bree has finished college and taken over most of the responsibility for the Crow’s Nest, Pete’s bar, transforming it into something more than just another smoky neighborhood bar in the process. She’s also a leader in the movement to revitalize Red Hook, something she does in tribute to her father who loved the community.  Her work, her friends, and her love for ten-year-old Nikki, the most recent of Pete’s kids fill her life.

Bree knows she needs help with a recovering Pete, a bar to manage, and a ten-year-old to care for, but Logan Blaise is the foster son she contacted. She’s not prepared for an encounter with Storm. In fact, at first she thinks he’s a burglar and attacks him with a frying pan. Once she recognizes him she realizes that the chemistry between them has just grown stronger in the years they have been apart. But Bree is determined that history will not repeat itself. Convinced that Storm, who “probably had Peter Pan tattooed on his ass,” has not disposed of his running shoes, Bree decides to indulge her lust and protect her heart. Storm is just as eager as Bree to finish what they started all those years ago, but he refuses to become just a bed partner. He’s confused about what he feels for Bree, for Nickki, and for Red Hook, but he knows that Bree is too important to him to settle for a relationship that ends with the physical. But first Breanna has to trust him with her heart and with the secrets she’s keeping from him, and that’s a battle he may not win.

I love reunion stories, and this is a terrific one with layers of complications. Bree and Storm both have their share of baggage, and they have to learn to trust themselves as well as one another. There’s an interesting bit of role reversal going on. Not only is Bree the character who insists on sex without emotional engagement, but she also demonstrates repeatedly an insensitivity to Storm’s feelings and a determination to believe the worst of him. Storm is the one who recognizes early on that he needs commitment, and he is openly vulnerable to Bree’s assaults on his integrity. He takes pride in her and what she has accomplished and even takes care to see that she is protected after her lack of trust convinces him there is no hope for the two of them.

The story includes a strong cast of secondary characters. Pete is an endearing grump who leads with his heart. Nikki is a fierce, wounded, smart, and funny kid who stole my heart in the first few pages. I also loved the friendship that connects Bree and her girlfriends Rocki and Patrice. They have her back, but they can practice tough love when it’s needed.

Red Hook is as much a presence in the story as any character. It’s also a welcome urban addition to a contemporary romance landscape that seems to have become almost the exclusive property of small-town settings in recent years. I was particularly pleased that the reclamation of the community is not regentrification fueled by outsiders but revitalization led by the residents.

I read Kaye’s Romeo, Romeo when it was getting a lot of buzz several years ago and really enjoyed it, but I haven’t read anything by her since. I liked Back to You so well that I downloaded “Hometown Girl,” the novella that introduced the Red Hook series, and I have You’re the One, the second Bad Boys of Red Hook novel, on my book calendar. It’s Logan’s story, and it releases June 4. I’ll be checking out Kaye’s backlist too. If you like contemporary romance with a nice sizzle balanced by a compelling story about characters who will charm and captivate you, with the addition of a rich sense of place, I definitely recommend Back to You.