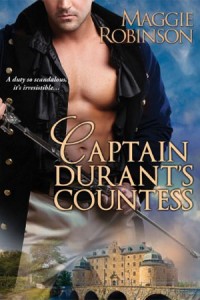 Maris, Countess of Kelby loves her husband.  As the daughter of his secretary and best friend of the earl's daughter, Maris grew up on the earl's country estate and has admired him from a young age, sharing his scholarly passion for the archaeological treasures uncovered by him as well as the previous Earls of Kelby. Ten years ago, following her father's death, the earl married Maris to protect her. Though they do not have a physical relationship, they have a genuine affection between them and Maris would do anything to make her elderly, dying husband's dearest wish come true.  Which is how the sheltered and very proper countess comes to be standing in London's notorious Reining Monarchs Society, a private club where people can act out their sexual fantasies in private,  facing a very naked and uncooperative Captain Durant, and determined to stay until she has convinced him to carry out the task for which he took her husband's money.

Coming home after leaving the military to find his beloved younger sister in serious health,  Reynold (Reyn) Durant knows he needs a sizable sum of money to move his sister out of London and give her damaged lungs a chance to heal.  It could be her only hope of survival.  A vaguely worded advertisement in the London List gives him the means to help his sister but, after taking the money, Reyn's conscience intervenes and he decides he can't sleep with another man's wife for money..no matter how desperately that man needs an heir to save his estate - and his life's work - from his villainous nephew.  That's before he meets Lady Kelby; a prim, proper, starchy and surprisingly innocent thirty-four year old woman to whom the worldly Reyn is inexplicably drawn.

This storyline usually doesn't appeal to me but in Maggie Robinson's talented hands, it works.  She brings together a buttoned-up woman who has never known passion in her life and a charming, passionate rogue who shows surprising gentleness and vulnerability.  Then she throws them into a situation where a happy ending seems impossible but, as this is a romance, we know somewhere down the line a happy ending awaits.  I like that Robinson takes her time with these characters, allowing them to gradually come to know one another and us to know them.  I also appreciate the fact that she keeps their emotions tied to reality; showing the pleasure Maris experiences as she slowly opens her mind and heart to a physical connection with a man while at the same time dealing with the guilt in knowing that these wondrous feelings are a result of betraying her husband - not so much physically, but emotionally - even though he's been more of a father to her than a true husband.  Then there's Reyn; a surprisingly gentle and vulnerable man who finds himself developing genuine feelings for this woman who is beyond his reach, because she is married but also because of her station, her education and the fact that she is five years his senior.

There's plenty of sizzle in this book but it was ultimately the complexity of the characters, the emotional depth and tenderness that kept me immersed in the story.  The secondary cast of characters is richly drawn, especially Reyn's sister.  The villain of the story is dealt with in an interesting, and humorously fitting, manner though I felt he got off a bit too easy considering his crimes.  But, in the end, I was not as concerned about his fate as that of Reyn and Maris.

Don't let the premise of this book or the fact that neither the hero nor the heroine is very likable in the beginning put you off.  Stick with the story and you will be rewarded with a hero and heroine who reveal themselves to be worthy characters with genuinely good hearts who deserve the tender, heartwarming and thoroughly satisfying romance that Maggie Robinson has given them.