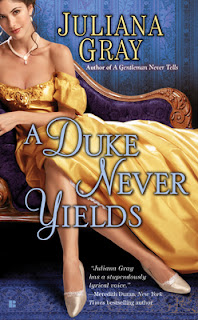 Impatient with the strictures of polite British society, Miss Abigail Harewood has decided to live life on her own term — and the first thing she requires is a lover. When the commanding Duke of Wallingford arrives on the doorstep of her leased holiday castle, she thinks she's found the perfect candidate: handsome, dashing, and experienced in the art of love.

But tempting Wallingford into her bed proves more difficult than she imagined. Restless and dissatisfied with his debauched life in London, the formerly rakish duke is determined to spend a year chaste. But as Abigail tries her best to seduce him, Wallingford finds his resolve crumbling in the face of her irresistible charm... and her alluring secrets.

Before we proceed any further, let me issue a retraction and formal apology to Juliana. In my review for A Gentleman Never Tells, I mistakenly labeled the series as Edwardian, when in fact it takes place during the late Victorian era.  I deeply apologize for the error, and promise to be more careful in the future! Now back to our regularly scheduled program.
I have been looking forward to Abigail and Wallingford’s story ever since the beginning of the series. My expectations were high since Juliana had built the Wallingford/Abigail relationship quite well in the first two books, giving us tantalizing peeks and tidbits to whet our appetite. So, imagine my shock and delight when I received an ARC of A Duke Never Yields from Juliana herself as a gift! I quickly devoured the book and it definitely delivers on the goods.
A Duke Never Yields is the third and final book in Juliana’s Affairs by Moonlight Trilogy. As with the two previous books in the series, the events of the novel take place during the same time, and scenes from A Lady Never Lies and A Gentleman Never Tells are now told from Abigail and Wallingford’s perspective. For my part, I was dying to find out how Wallingford came to be doused in goose feathers, and we finally get the answer in this book!
Wallingford is a man with the world at his feet. Born to wealth, privilege, position, and power, not to mentioned blessed with good looks, he has never wanted for anything in his life. But Juliana shows us all of this good fortune is a double edged sword.  Since he has had everything handed to him, up to this point, he has led the careless, carefree, indulgent life of a rake who no one has any expectations of. Wallingford is considered irresponsible and incapable of accomplishing anything on his own. His grandfather, the Duke of Olympia, frustrated by his grandson’s lazy and immature lifestyle, gives Wallingford a tongue lashing.


“Have we come to this point at last? Is this why you came to see me this morning? I am to be a stud? My ability to breed another duke constitutes the sum total of my usefulness to you, does it?”

“My dear boy,” Olympia said, “has the entire conduct of your adult life ever suggested your usefulness for anything else?”


His grandfather’s words haunt him throughout the rest of the novel. Wallingford is so overcome with self-doubt, he avoids Abigail like the plague lest he give in to temptation and live up, or in this case, live down, to everyone’s opinion and expectations of him. Juliana does a wonderful job showing us Wallingford’s journey to be the man he was meant to be, a man who is capable, able to command the respect of others, and worthy of the love of a woman like Abigail. But more importantly, as much as he wanted to prove himself to Olympia and others, Wallingford had to prove to himself that he could rise to expectations and be more than the mere stud for future dukes. Wallingford learns to believe in himself, and his character arc is one of my favorite aspects of the novel. His journey, his sacrifice to break the curse, is the stuff of a true hero.
Miss Abigail Harewood is an unconventional lady, to say the least. She regularly disguises herself as a man, is well versed in gambling, has no use for marriage, and indeed eschews the institution. She is convinced marriage isn’t for her, and doesn’t want to give up her freedom and independence to live under the thumb of a husband. In fact, she has decided to indulge in a scandalous affair and picked out just the man to show her all the delights of the flesh-the Duke of Wallingford. The cat-and-mouse between Abigail and Wallingford where she actively pursues him while Wallingford tries to resist her, is hilarious and pure comedic gold. When they do make love, and Wallingford insists on marriage, Abigail resists. I found this an interesting and refreshing twist, as in many historical novels, it is the heroine who yearns for love, marriage, and commitment. In this case, it’s Wallingford who is doing his best to persuade Abigail to the altar, not the other way around. I understood and sympathized with Abigail’s fears of losing herself and her identity since she is such a bright, vivacious, and energetic personality and it would be a shame for her to lose the sparkle of what makes her Abigail. Instead, Juliana shows us brilliantly that marriage to the right person means you don’t have to lose or change a thing. Rather, marriage and love can free you and allow you to be your best self. That is certainly true for Abigail and Wallingford.
The relationship between Abigail and Wallingford is funny, sensual, romantic, with lots of passion and drama thrown in. I once heard it said that true love, and the romance genre, is about finding someone who loves and accepts you for your worse self, but empowers you to be your best self. I can think of no better way to encapsulate Wallingford and Abigail’s story. Abigail knows all about Wallingford’s sordid past, and does her best to accept it. Nevertheless, she still believes in him, sees his “tender heart” underneath the exterior and her belief in him is what gives Wallingford the confidence and strength to prove himself. For his part, Wallingford helps Abigail blossom from a young woman with romantic and fanciful notions to a wife and mother with more maturity and a deeper sense of who she is and her place in the world.
I highly recommend A Duke Never Yields. It is a wonderful and satisfying ending to the series. Juliana wraps up everything neatly and all of our questions are answered. We find out the truth about Morini and Giacomo, and the true nature of the “curse” that surrounds the castle. Want to know if the curse is real, and if it gets broken? You’ll have to read it and find out! For my part, I am eagerly looking forward to Juliana’s next series, which kicks off with How to Tame Your Duke. It is slated to be released in June and I already have my calendar marked.
~Lisa
http://teatimeromance.wordpress.com/
Posted by Andrea at 12:30 AM