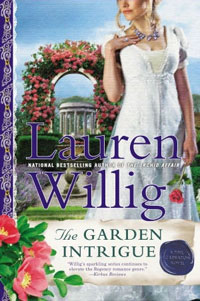 Emma Delgardie is a young American widow who has charmed the most socially prominent people in Paris with her vivacity and “naturalness.” Emma eloped at fifteen with an older Frenchman, resulting in a temporary estrangement from her family. Hortense Beauharnais, a friend from their days at Madam Campan’s School for Young Ladies, and her mother, the wife of Napoleon Bonaparte, stood by Emma when her own family did not. Emma has made Paris her home since she was widowed at nineteen. The fashionable world sees her as a merry widow, unaware of the grief that lies below the polished surface.

Augustus Whittlesby is a poet, quite a bad poet. He is a fixture at court, proclaiming his execrable verse and parading his poetic temperament to the amusement and sometimes outright mockery of the crowd. What few know is that Whittlesby is actually an agent of the Crown who has been using his poetry to pass on information he has gathered to none other than the Pink Carnation (Jane Wooliston). There is nothing fake about the feelings he has developed for Jane, and after ten years, he has grown weary of the role he’s forced to play. But his superiors have learned that Napoleon, with a new weapon in his possession, is planning an invasion of England, and Whittlesby is their best bet for garnering information about Napoleon’s plan. His orders are to find a way to attend the gathering at Malmaison, Napoleon’s summer home, where the secret weapon is to be displayed to a select company.

Emma, who is considered almost family by the Bonapartes, is charged with creating a masque, significantly one with a nautical theme, for the gathering at Malmaison. Whittlesby realizes that Emma is his best means of securing an invitation to Malmaison and offers his services as collaborator on the masque. Emma rejects his offer initially but seizes on it when a visiting relative reveals that her family expects her to return to New York, a plan he has expedited by booking her passage on the ship on which he is returning. As they spend time together, Emma and Whittlesby begin to discover the person behind the public personae each has adopted.  The two don’t so much fall into love as grow into it in a gradual blooming with a few frost warnings along the way to threaten the budding relationship.

Meanwhile, in the framing contemporary story, Eloise Kelly continues her research and tries to comfort her boyfriend Colin Selwick in his dismay over the infestation of a film crew at Selwick Hall. Add the presence of Colin’s stepfather, Colin’s ex, Colin’s sister, and Colin’s sister’s ex, and the complications compound. From Eloise’s perspective, the greatest complication is the fact that her fellowship is running out, she has a tempting job offer at “the other Cambridge,” and she has to make a decision about whether to stay in England or to return to the United States, whether to trust she and Colin have a future or to put her career in academia first.

This is the ninth book in Willig’s Pink Carnation series, and it’s another winner. The historical setting is France at the time Napoleon is declared emperor. Bits of American history are interwoven into the story. Emma is the niece of James Monroe and accompanies him and his family to Paris where he is American envoy in 1794. Robert Fulton, inventor of the steamboat, is also inventor of the weapon that could give Napoleon the means of invading England. The theme of the masque/masks is skillfully employed. The emphasis on words—poetry, epistles, notes—and what words reveal and conceal adds interest and complexity.

For me, the characters are the most important part of any story, and these characters are a delight. Emma seems to be all frivolity and sparkle, but this image is undercut by her very real grief over the death of a husband she loved but was just beginning to know and by her knowledge of engineering and her commitment to realizing her husband’s dream. The deception that Whittlesby has carried out for over a decade requires intelligence, courage, and considerable ability to act and to rhyme. The reader also discovers a few intriguing tidbits about Jane Wooliston.

If you are a fan of the series, you definitely don’t want to miss The Garden Intrigue. It follows fast on The Orchid Affair, but it is substantially lighter in tone. There is a rich vein of humor in this one, but it also has its heart-twisting moments. If you have yet to read Willig, I highly recommend her books. The core story works well as a standalone, but readers new to the series may have questions about the characters in the frame story. As for me, I already have The Passion of the Purple Plumeria (August 26) starred on my book calendar. I have an abiding weakness for alliteration and love the sound of “plumeria,” and so the title won my heart. That was before I knew that the new book will be about Miss Gwen, the redoubtable companion of Jane Wooliston. Now I’m practically salivating at the thought of it.

Posted by pjpuppymom at 9:28 AM