Bring an Author to Your Hometown

Last month we told you about a contest to bring New York Times and USA Today bestselling author Susanna Kearsley to your hometown. (click here to read post)  Sourcebooks has announced the ten finalists in the Send Susanna Kearsley to MY Hometown contest and voting is now open to choose the three towns that will host Susanna on her tour.  The top ten towns are:

Murder by the Book – Houston, Texas

Haven't read Susanna Kearsley's wonderful books yet?  Here's some info about the author and her upcoming release.
Susanna Kearsley is a New York Times and USA Today bestselling author whose books have won numerous awards.  She's a RT Reviewers Choice winner for Best Historical Fiction and Best Historical Fantasy/Paranormal, a RITA finalist and a finalist for the UK's Romantic Novel of the Year. Her writing has been compared to Diana Gabaldon, Daphne Du Maurier and Mary Stewart.  You can find more information about Susanna and her books at her website. 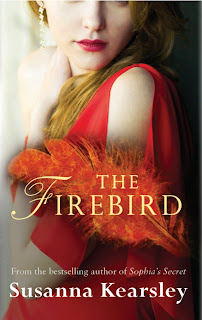 Posted by pjpuppymom at 8:46 AM

Email ThisBlogThis!Share to TwitterShare to FacebookShare to Pinterest
Labels: Booksigning, Bring an Author to Your Hometown, Contest, Susanna Kearsley, The Firebird